In the midst of such darkness, how can one find the light? 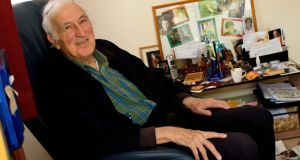 Jean Vanier abused women who came to him for spiritual direction, an egregious crime.

When the news about Jean Vanier’s manipulative sexual abuse of at least six women broke, it was profoundly depressing. Decades ago, I witnessed him arriving into a UCD lecture hall full of rambunctious students. Once he started to speak, a hush fell. I remember thinking that I was in the presence of someone really special, a genuinely holy individual.

Jean Vanier abused women who came to him for spiritual direction, an egregious crime. If someone who undertakes to bring people closer to God instead uses them as a means of personal sexual gratification, it does untold damage. It is particularly awful if it is a child but adults can also be marked for life by such an abuse of trust.

Catholics and other Christians are wrestling with how to reconcile the genuine good done by Jean Vanier with actions that did such harm. The communities he founded where people with and without disabilities live side by side in mutual respect and care are inspiring models of what life should be like all the time, and so rarely is. They must continue to be supported.

When the scandals began more than two decades ago about the level of sexual abuse of children in the Catholic Church, people asked whether it was an Irish problem that we had exported to the rest of the world.

In France today, people are asking whether sexual abuse is a French problem and whether the pseudo-progressive attitudes to sexuality of the French elite allows this problem to fester. (Jean Vanier is French-Canadian.)

France is reeling from a book written by Vanessa Springora about how she was manipulated into a sexual relationship with a feted French writer, Gabriel Matzneff, when she was 14 and he was nearly 50. Matzneff had written openly about stalking and seducing teenage girls and about having up to four boys aged 8-14 in his bed.

Norimitsu Onishi, writing in the New York Times, states that “greying leftist intellectuals saw in his books the enduring free spirit of the May ’68 countercultural revolution” while right-wingers saw in him a revolt against political correctness. His admirers ranged from former president François Mitterand to Jean Marie Le Pen. Meanwhile, left-wing intellectuals such as Michel Foucault, Roland Barthes, Jean-Paul Sartre and Simone de Beauvoir spoke in defence of paedophiles as a persecuted minority in the 1970s.

Matzneff wrote in religious terms about abusing children: “To sleep with a child, it’s a holy experience, a baptismal event, a sacred adventure.” It has taken Vanessa Springora’s courage to cause public revulsion in France.

In  1990 as a panellist on a French literary programme, Quebecoise journalist Denise Bombardier expressed her horror when Matzneff was rewarded with benign approval for joking about underage sex. For her trouble, she was called a stupid bitch and mocked for her provincialism. There is no doubt that the kind of alleged sexual liberation that characterised the late 1960s and 1970s allowed a culture to develop where it is easier to seduce, bully and manipulate people sexually. This bleeds into every area of life, including the church, where the results evoke a particular horror because it stands in such stark contrast to the high ideals that church people preach.

Vanier was a layman without a vow of celibacy. If he had chosen to marry, it would have been met with universal approval and happiness. But instead, he chose to justify abuse as something spiritual. How appalling it must have been for his victims to hear him referred to continually as a living saint. Their courage, like the courage of Vanessa Springora, is immense.

Vanier had fallen under the influence of two Dominican priests, Fr Thomas and Fr Marie-Dominique Philippe, brothers who had a twisted spirituality that allowed them to break their vows and abuse the trust of women.

The Dominican Order has questions to answer. Vanier’s mentor, Fr Thomas Philippe, received severe censure for his predatory activities in 1956 and yet was back counselling both men and women by the early 1960s. How was that allowed to happen?

Serial predators such as Jeffrey Epstein and Harvey Weinstein are disgusting but there is something particularly vile about religious people who abuse, especially under the guise of spiritual direction.

Two things have given me comfort these past days. One was an article by Fr Thomas Reese in the National Catholic Reporter, where he says he no longer questions why evil happens. Instead, he wonders, how is goodness possible? He says, “Given where we came from and the world in which we live, why is there love? Why is there self-sacrifice? These are miracles of grace.”

The second was an account of Witold Pilecki, a Polish cavalry officer who deliberately allowed himself to be captured and taken to Auschwitz. He was later assassinated by the Communists. A devout Catholic, Pilecki was inspired to acts of courage and heroism by his faith. Pilecki is proof that goodness is still possible. Yet if even he turns out to be profoundly flawed, the truth remains. Darkness is real but it never completely extinguishes the light.