Breda O'Brien: If we really valued children we would prioritise their carers 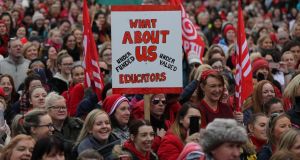 Early-childcare providers, educators and parents took part in a protest in Dublin on Wednesday calling for greater government investment in the sector. Photograph: Nick Bradshaw

During the week, large numbers of those working in centre-based childcare took to the streets to protest about poor pay and working conditions.

As individuals and families, we care for our children. As a society, judging by the policies of successive governments, we care neither for children nor those who care for them.

It is disgraceful that those working in early-childhood education should be on subsistence wages, often with no holiday pay, maternity leave or recognition of professional qualifications.

In Ireland, our birth rate is falling even as the economy improves. This is not unconnected to 20 years of tax individualisation

It is equally disgraceful that those who wish to care for their own children in their own homes are being consistently discriminated against in our tax code.

Furthermore, flexible working is a pipe dream for many parents as mortgages and rent often demand two full-time incomes.

Meanwhile, the voices of children are being lost in the debate. Take just one example. The 2017 Action Plan on School-Age Childcare produced by the Department of Children and Youth Affairs and the Department of Education and Skills included consultation with school-age children about where they would like to be cared for after school.

Children aged between eight and 12 years overwhelmingly voted for home as the place they would most like to be cared for after school (59 per cent). This was followed by friends’ houses (17 per cent), relatives (13 per cent), an after-school club (6 per cent), childminder (4 per cent) and creche (1 per cent).

Similar figures emerged for those aged between five and eight, except that friends’ houses featured less prominently. All age groups wanted to spend time playing.

It is not such an unreasonable request, is it? To go home after school, relax, play, eat something and chat with your parents about your day? Yet the overwhelming focus for successive governments has been to promote centre-based childcare for children of this age, despite a clearly-expressed preference for home.

And while it is impossible to ask babies and toddlers about their preferences, you would not need to be a child psychologist to know what babies would overwhelmingly prefer, too.

Early-childhood education has positive impacts on children who are in deprived circumstances. The Government’s own research, First Five, admits that for children aged under three, more than 32 hours a week of centre-based care “has been linked to poor outcomes in language and cognitive development”.

Despite this, government policy for some 20 years has prioritised non-parental childcare as a means of getting women into the paid workforce. The Nordic countries are seen as a model for childcare but there are some grim statistics in the recent Nordic Ministers Council document, State of the Nordic Region 2020, launched in Copenhagen last Tuesday.

Pensions are paid by the contributions of the next generation. The demographics do not simply take care of themselves

Despite having a high-taxation and high-services model, including very generous parental leave and childcare arrangements, only the Faroe Islands are producing enough children to maintain their population. Three other regions have historically low birth rates: Iceland, Norway and Finland. If it were not for immigration, the situation would be even more serious.

In addition, at the launch of the report, Danish minister for Nordic co-operation Mogens Jensen said an ageing population was going to put a severe strain on the current welfare system. He also said that relieving the general unhappiness of young people in Nordic countries would be a priority for the next two years. Why, despite their relatively privileged status and extensive childcare system, do young people in these countries grow up to be profoundly unhappy?

Pensions were one of the biggest election issues. To state the obvious, pensions are paid by the contributions of the next generation. The demographics do not simply take care of themselves. If the Nordic countries, despite long parental leave, and state-provided childcare, cannot replace themselves, something is seriously wrong with the model that is being trumpeted as an ideal.

In Ireland, our birth rate is falling even as the economy improves. This is not unconnected to 20 years of tax individualisation. Charlie McCreevy began the move towards taxing people as individuals, not as family members.

It achieved the aim of getting more women into the paid workforce but social engineering came at a heavy cost. One eye-popping statistic is that it would cost an estimated €577 million to reintroduce equality between single-earner and dual-earner couples. It shows what a money-spinner individualisation is for the government.

But it is revenue raised at the expense of parental choice. It forces more women (and some men) into full-time work because it is difficult enough to finance a home on two incomes and impossible to do on one income, not least due to the inequalities caused by tax individualisation.

If we really valued children, we would prioritise those who care for them. This should include both making it possible for creche workers and childminders to earn a decent living even if children spend shorter times in non-parental childcare, and making it easier for parents to care for their own children.

Most radical of all would be putting money into the hands of parents to spend as they wish, either on centre-based childcare, a childminder, care by relatives, parents spending more time at home, or any combination of the other options.