Stephen Collins: Sinn Féin’s rallies show the need for other parties to get on with forming government 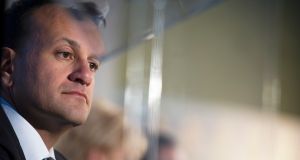 Irish politics is not in a good place. On the one hand Sinn Féin has taken the unprecedented step of organising public rallies to demand inclusion in the next government while on the other Fine Gael, the professed defender of the State’s institutions, is having difficulty coming to terms with its responsibility to participate in government.

While there is no arguing with the fact that Sinn Féin got more votes than any other party in the general election, that in itself gives it no automatic right to take over the reins of government. There have been many times in the past when parties with a far bigger percentage share of the vote than Sinn Féin achieved this time around found themselves in opposition.

On none of those occasions when it was by some distance the biggest party in the State did Fianna Fáil start agitating outside the Dáil demanding to be in government. The party accepted without reservation the constitutional position that the government is formed by whoever can out put together a majority in Dáil Éireann.

The rallies currently being organised by Sinn Féin are not threatening or violent but they do expose a different approach to politics than that of all the other parties elected to the 33rd Dáil and provide ample justification for the refusal of Fianna Fáil and Fine Gael to consider going into government with it.

The focus this week on Sinn Féin’s refusal to use the term Ireland or the Republic to describe the country it aims to govern exposes a mindset which sets it apart. Instead of the terms used in the Constitution and laws of this country, Sinn Féin spokespersons refer to the “southern State” or the “free State”.

It might appear pedantic but it goes to the heart of the republican movement’s belief that the State, which will shortly celebrate a century of existence, is illegitimate. Another illustration of this has been Sinn Féin leader Mary Lou McDonald’s repeated use of the phrase “the war is over” in reference to the campaign of violence waged by the Provisional IRA. As Michael Lillis, one of Ireland’s most distinguished diplomats who played a significant role in bringing peace and justice to Northern Ireland, pointed out in a letter to this newspaper, the Constitution is clear and explicit on the question of war.

“The Constitution, which as taoiseach she would be expected to uphold, is explicitly and repeatedly categorical on questions of war. Some examples: article 9.3 (duty of the citizen to uphold the State); article 13.5, 1 and 2 (command of Defence Forces); article 15.6. 1 and 6.2 (Oireachtas alone has right to raise military forces); article 28.3 (assent of Dáil Éireann necessary for declaration of war); article 29.2 (pacific settlement of international disputes), and article 39 (defines treason as inter alia attempting to overthrow the State by force of arms or conspiracy to do so). It would be grotesque if a credible candidate for taoiseach were incapable of subscribing without reservation to these starkly unambiguous provisions of the Constitution,” wrote Lillis.

These issues go to the heart of Sinn Féin’s suitability for government and explain the refusal of the other two big parties to engage with the party. Its attempt to pressurise the political system by staging rallies around the country should reinforce the determination of the other parties to get on with it and form a government on an agreed programme.

Fianna Fáil leader Micheál Martin has been clear and unambiguous about what needs to be done but, so far at least, Fine Gael seems more intent on sulking in response to the rebuff it received from the electorate rather than facing up to the imperative of participating in government. It is likely that at the end of the day Fine Gael will engage with Fianna Fáil in serious discussions but if the current snail’s pace of movement continues the process could take months. What they need to grasp is that the longer it takes, the more the public is likely to lose faith in both of them.

There is no mystery about the stark options facing the mainstream parties. Either they agree on a formula to put a government together or they trigger another election. If the second option represents an appalling vista then they had better get on with it and engage in serious talks about the formation of government before they further erode public confidence in our democracy.