Breda O’Brien: Young people are paralysed with fear about the planet, and we must take action 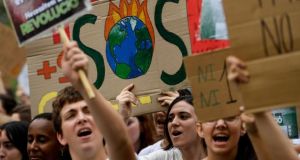 This mid-term, I realised that I have been a teacher long enough to witness three major waves of anxiety-inducing conditions among young people. The first was as a young, naive teacher in the 1980s, when teenagers lived in the shadow of a kind of existential mushroom cloud. They feared that the world would be destroyed by a nuclear holocaust. The macabre term “mutually assured destruction” kept Irish teenagers awake at night.

The second wave was around September 11th, 2001, when fear of terrorism ruled. Children who watched bodies plummeting from the Twin Towers were left traumatised. The third wave is the era of eco-anxiety. Younger teenagers, in particular, are terrified of climate change and very despairing about the future.

It’s a tough one for parents and other adults to navigate. Many adults have no idea how to deal with their own anxiety about the issue except by escaping from it or burying it. Young people often do not have the same ability to compartmentalise.

Climate change is everywhere they turn. The musicians they adore sing about it, the celebrities they admire make statements about it, and the schools they attend prioritise it.

Despite the bombardment, only a minority of young people are really well-informed. Like adults, young people often catch the headlines but not the details. The implications of climate change are terrifying enough but some young people, particularly those in late childhood and early teens, actually think that things are worse than they are.

They have not registered fully that it is the poorest countries that are suffering and will suffer most. A significant minority believe that the end of the world is imminent, in the sense that civilisational collapse is only a decade away.

To the younger adolescent mind, it can appear like climate denial to suggest that things are not quite that bad, even if they are very, very bad, indeed.

And of course, there is also that endearing adolescent characteristic of inconsistency – the same teenager lying awake at night worrying about the planet may be outraged at the thought of not taking a foreign holiday which depends on flights.

But even with all of that taken into account, the oceans choked with plastic, the loss of biodiversity, the impact on poorer nations: all are real catastrophes.

For very young children, protecting them from trauma is a legitimate choice. Adults are supposed to bear those burdens. But from the age of about nine onwards, it is impossible to shield them.

However, it is important to convey hope. This is different from optimism, which can be a Pollyanna-ish belief that everything will work out for the best despite the lack of evidence that any such thing will happen.

Despair paralyses. Hope motivates. As adults, we need to model all the behaviours that we want everyone else to carry out.

The immediate objection is that this crisis cannot be solved by individual actions. Unless China and the United States take serious action, it is all pointless.

But change does not happen only from the actions of big players. In fact, change rarely happens like that at all.

Change comes about from the actions of committed individuals and families, who persist in hopeful action even when it seems pointless.

I often think of William Wilberforce, the anti-slavery campaigner, who did not see tangible results for eighteen years. People made the same arguments about slavery: ending it will destroy the economy and damage the poor still further.

You might argue, rightly, that we do not have eighteen years to spare.  But no-one knows when real change will come.

Anxiety in itself is not necessarily a bad thing. It can motivate people to try harder or to take action

Few would have believed that the Berlin Wall, once a seemingly permanent reality, would crumble quite quickly in the end. Yes, there was a happy confluence in the personalities of the leaders of Russia, the US and the Catholic Church at the time. Even more important were the people on the ground, who persisted and took action even in the face of seemingly overwhelming odds.

Anxiety in itself is not necessarily a bad thing. It can motivate people to try harder or to take action. An anxiety disorder is different. It means that normal anxiety levels have become debilitating.

My World Survey 2, the largest ever study of Irish young people’ mental health, which was carried out by the UCD School of Psychology and Jigsaw charity, suggests that the number of those aged 12 to 19 reporting severe anxiety has doubled from 11 per cent to 22 per cent since 2012. Anxiety disorders probably need professional help.

More moderate anxiety is relieved by reclaiming some measure of control. Our teenagers are often imprisoned behind screens. Helping them to take time in green space, minus the phone, can be a first step. Learning to love your patch of the planet both heals and motivates

Encouraging them to channel their anxiety into effective action with others is important. Instead of obsessing about the threats to the planet, the much-maligned Greta Thunberg took action.

As adults who care about our children, we could stop rolling our eyes about Greta, and instead, try to model a fraction of her determination and courage.

1 Coronavirus in Ireland: New powers of arrest for gardaí expected to come into force
2 Coronavirus: Death rate from Covid-19 in Ireland rises to 2.4%
3 Coronavirus: Notion of a rapid economic recovery is at best wishful thinking
4 No April Fool jokes please, we are not in the mood
5 Coronavirus tales confirm – and shatter – German stereotypes
Real news has value SUBSCRIBE