Paris Letter: Most shocking thing about Matzneff affair is everybody knew 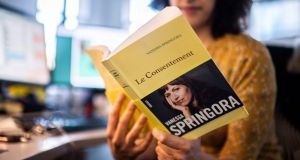 Le Consentement by Vanessa Springora. A parliamentary deputy quoted the book when proposing a law redefining sex with any minor under the age of 15 as rape. Photograph: Martin Bureau/AFP via Getty Images 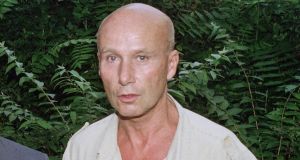 Vanessa Springora was not yet 14 years old when she accompanied her mother, a press attaché for a Paris publisher, to a literary dinner. Springora was flattered that Gabriel Matzneff, a writer 36 years her senior, took an interest in her. Though not handsome, the tall, slender grandson of Russian immigrants dressed elegantly and spoke with provocative wit.

Springora’s mother turned a blind eye. The schoolgirl and writer had a two-year affair that ended only when she discovered that Matzneff had numerous adolescent lovers, male and female.

Springora is now the director of Julliard publishers. Her autobiographical book has blown apart the cosy little world of contemporary French literature. A conservative parliamentary deputy quoted Consent when she proposed a law redefining sex with any minor under the age of 15 as rape. The Paris prosecutor has opened an investigation into Matzneff’s life, on suspicion he raped a minor.

Although the Matzneff-Springora affair has passed the statute of limitations, the prosecutor says he wants “to identify all possible victims who suffered similar offences in France or abroad”. Matzneff wrote copiously about his affairs with minors, and about his sexual tourism in southeast Asia.

The offices of Gallimard, France’s most prestigious publisher, which published Matzneff’s diaries from 1990 until last year, were raided by French police, who wanted to seize his works as possible evidence.

Le Monde newspaper, which once employed Matzneff as a columnist, published two full pages detailing the background to the attribution of the Prix Renaudot for essays, France’s second most prestigious literary award, to Matzneff in 2013.

One of the judges, Christian Giuidicelli, who was also Matzneff’s publisher at Gallimard, and who holidayed with him repeatedly in Manilla, pushed hard for Matzneff to receive the prize. Judges included a Nobel prizewinner, a member of the Académie Française and other well-known authors and literary figures.

Springora was so sickened to learn that the man who nearly destroyed her life had won the Renaudot that she determined to write Consent.

Perhaps the most shocking thing about the Matzneff affair is that everybody knew. Matzneff never hid his sexual passion for children. In 1975, he promoted his essay The Under 16s on Apostrophes, which was for decades France’s leading literary television show.

“I think that adolescents, young children, say between age 10 and 16, are perhaps at the age where their emotional and sexual impulses are strongest, because they are new,” Matzneff said. “And I think there is nothing more beautiful and fecund that can happen to an adolescent than to have a love affair, either with someone their age, but also perhaps with an adult who helps them to discover themselves.”

Matzneff was invited to appear on Apostrophes five times. The ageing, now retired presenter Bernard Pivot says he regrets “not having said what I should have”.

In March 1990, the Québecoise journalist Denise Bombardier challenged Matzneff on the set of Apostrophes. “We know very well that little girls can be crazy about a monsieur who has a certain literary aura. Just as old men attract little children with bonbons, Mr Matzneff attracts them with his reputation . . . How do they come out of this, these little girls? I think they wither, and that most of them are withered for the rest of their lives.”

Matzneff receives an annual stipend of €6,000 from the national book centre CNL. For the past 26 years, he has inhabited a studio apartment in the Latin Quarter belonging to the city of Paris, for which he pays only €348 monthly. A spokesperson for the city told AFP it has “no legal basis” to expel Matzneff, because his income is below the ceiling for low income housing, and he is over the age of 65.

Matzneff, now aged 83, has run away to the Italian Riviera. “To learn that Vanessa decided to write while I am alive what is not the account of our luminous and burning love, but a hostile, nasty, denigrating work intended to hurt me . . . provokes sadness in me and suffocates me,” he wrote in L’Obs magazine.