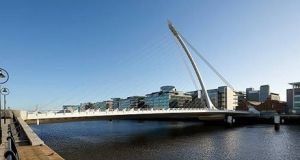 The challenges facing rural Ireland may have dominated the airwaves and print media during this general election campaign, but proper debate on our urban centres and Dublin in particular seems lacking.

It often resorts to lamenting that we can’t be like somewhere else, with a particular focus on other European cities. Whereas Barcelona was once the city to aspire to, now Copenhagen gets rolled off the tongue as our role model worthy of emulation.

Furthermore, “big ideas” are often presented as what are needed to solve the housing and other aspects of our urban crisis. Ideas range from the infill of Dublin Bay in Sandymount to the wholesale transformation of Dublin Port.

One well-rehearsed proposal, rehabilitated more than a decade after it was first dismissed, is to relocate Dublin Port and free up land for housing, with the examples of Bremen, Copenhagen, Amsterdam, Oslo, Cape Town, and London’s Tilbury docks cited in support of this argument.

The European projects cited as models are in the main the equivalent of the Dublin Docklands regeneration, where redevelopable port lands were freed up by port transformation, and almost all these cities retain their ports located adjacent to their cities.

The discourse spun in Ireland about the need for port relocation to “liberate” land and create beautiful new living spaces is nothing more than a narrative to progress a narrow vision of what our 21st century capital should be – knowledge economy workers that are consumption-oriented, middle-class and young.

The arguments we hear aired in Ireland often ignore the realities of urbanism, and create a disingenuous and distracting discourse about lack of land being the problem, missing the fact that there remains in Dublin substantial under-utilised sites with potential for redevelopment.

In reality, having enough land is not the issue; the crux of the matter is how it is managed. Soundbite arguments about cities elsewhere twist the reality of urbanism in these places – with their own housing affordability issues and inequalities – to suit the ideologies of some vocal populist urbanists.

Urbanism in Ireland and beyond has become dominated by a notion of mixed-use that is reduced to a blend of housing, commercial spaces and associated consumption-oriented functions. That this somehow exists outside the requisite support structure – production, transport, storage – seems a dominant, if unspoken, motif.

It’s easy to ignore the distribution centres, warehousing, power and waste water utilities that the city depends on if we just focus on the highly-polished, high-density urban spaces that are a marker of “sustainability”.

By focusing on comparator cities, core questions of land management, how we plan for the future, and what inclusive housing really means can be ignored in favour of extolling the virtues of a high density city and shiny new buildings.

Lacking from any of these discussions of other places are details on the role of housing as a globalised asset, associated forms of tenure, social inclusion strategies, and, most crucially, their urban governance structures.

Local, regional and national decision-making underpinning land management is the critical factor in providing the conditions for any “solution” to work in practice.

This is where comparison to other locations can be useful to understand the governance structures in place, and how they steer land management, density and daily mobility.

Carefully examining the interrelationship between, for example, land-use planning, transport, ownership structures and tenure arrangements can inform alternative approaches to thinking about the range of urban challenges facing us.

Debates over the form that cities in Ireland take need to be grounded in an understanding of the social, political and economic context within which other cities operate. There is a need to consider the less flashy reality of other locations, and focus on what gives shape to the social and spatial realities of the everyday lived experience.

Focusing on the connection between the local scale, through the provision of housing, land management and ownership, and urban regional governance would enable us to understand the reality of a more liveable city. Crucially, this focus is not opposed to higher density solutions, and in fact supports them, and situates changes at the neighbourhood level within the wider governance challenges that work across city-regions.

A key challenge for the future is how to avoid the imbalance between, on the one hand, the development of a picture-perfect city centre dominated by tourist-oriented development, and, on the other, the “out of sight, out of mind” approach to suburban and outer urban centres of employment and living.

It is not enough to believe that everyone will somehow have access to jobs in the knowledge economy and live in high-end dockland housing to which they can cycle. Engaging in an imagined inclusive future necessitates an engagement with all facets of urbanisation and the urban experience.

The new Metropolitan Area Spatial Plans proposed in the National Planning Framework and produced for each of our five cities have the potential to do this. As the process of government formation unfolds and media debate on future Ireland intensifies, there has been virtually no attention paid to these new plans, their potential and the wider new planning architecture within which they sit.

But maybe they are just not shiny enough.

Philip Lawton is assistant professor of geography at TCD, and Niamh Moore-Cherry is associate professor, UCD school of geography

1 Dropping Covid-19 positivity rates give grounds for hope, says HSE boss
2 Two hundred Irish retailers for all your online Christmas shopping
3 Sacha Baron Cohen: ‘I had to ring the alarm bell and say democracy is in peril’
4 Anatomy of a lockdown U-turn: Holding out against Nphet a gamble politicians unwilling to take
5 Father unaware partner and baby dead until gardaí called to raise alarm
Real news has value SUBSCRIBE