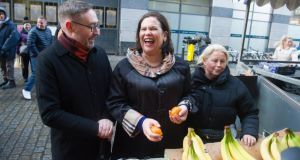 The general election is a story of outsiders who 20 years ago had 2.5 per cent of the vote and one TD. Most of the media in the Republic poured contempt on them. Meanwhile, with no particular sense of irony, the same party was being pushed by the same people towards constitutional politics in the North.

This is a story of outsiders whose status made them uniquely capable of hearing the needs of those who feel left out. Whether they will be equally capable of delivering real change remains an open question.

Thousands of families are completely frustrated. They are told that our economy is recovering but know that they have no chance of a home anywhere except in ever-widening commuter belts, with little public transport and inadequate childcare.

Meanwhile, older people dread a trip to an emergency department. They are furious about the possibility of broken pension promises.

When a homeless man was swept up and mangled like so much rubbish along with his tent it brought a slow, simmering anger bubbling to the surface.

Sinn Féin’s housing spokesman, Eoin Ó Broin, was more important than the party’s leader, Mary Lou McDonald, in this election. The short videos produced by Sinn Féin called Humans of the Housing Crisis gave a voice to a generation who feel unheard.

Sober, well-informed, offering solutions and pretty impossible to imagine belting out a few verses of Come Out Ye Black and Tans, Ó Broin made it possible for people to vote for Sinn Féin.

Among other approaches, he has consistently promoted the Ó Cualann model of housing, an innovative co-operative model. Ó Cualann leverages the banks of land in State possession, makes effective use of people’s savings, eschews the large profits developers demand and produces high-quality communities.

Minister for Housing Eoghan Murphy could have adopted this model. He did not. Unheard and left-out voters made sure Fine Gael heard them this time.

Meanwhile, Fianna Fáil leader Micheál Martin thought that by forcing his party in a socially liberal direction it would finally earn the love of young, urban voters. Young, pro-choice women were promoted in every possible constituency. The electorate did not care.

Fianna Fáil forgot a few vital things. Firstly, hardcore liberals would prefer to set themselves on fire and die screaming rather than vote Fianna Fáil. This did not preclude the same liberals from courting and flattering Fianna Fáil as a means to an end.

Fine Gael made much the same mistake. Just because people dance with you in Dublin Castle when you deliver for them does not mean that they like you or want to re-elect you. There was a naive belief that Fine Gael was cool now. Nope.

Taoiseach Leo Varadkar also took a swipe at the backwoodsmen of Fianna Fáil, seemingly unaware that the Irish electorate is quite fond of backwoodsmen (and women) who work their rear ends off for their constituents and who are in touch with their concerns. The market for patrician disdain, in contrast, is somewhat limited.

None of the backwoodsmen or women was punished by the electorate for holding pro-life views. Many of them topped the poll despite the Sinn Féin tsunami. I wish I could say it was because they were pro-life.

No, it was because they are perceived as hard-working people who care about for their constituents. It is not that the electorate votes only for selfish reasons. Housing and healthcare are basic needs that any worthwhile government should provide.

Being good constituency workers saved some high-profile Repeal politicians, too. It is still notable how many leading Repeal supporters lost their seats or were not elected, including Kate O’Connell, Regina Doherty, Katherine Zappone, Timmy Dooley, Lisa Chambers and Catherine Noone. If being pro-life did not hurt, being pro-choice did not help.

None of the major parties, including Sinn Féin, will look too closely at the implications of this. Nor will most of the media. But Sinn Féin, of all people, should be aware of what happens when people are treated as outsiders or are left out.

This is a lesson for the right-wingers, too, who want to leave out thousands of decent, hard-working immigrants, despite knowing how many Irish people emigrated longing for a welcome in the new country.

Politicians need to think a bit harder before they decide any group in society can safely be made to feel outsiders, unwanted or backwoodsmen. It only took 20 years for Sinn Féin, even with their frightening and murky history of supporting armed struggle, to repay with a vengeance those who sought to keep them outside the gates. Other political movements might not take so long.