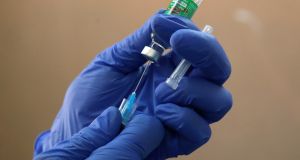 A health worker prepares to administer a Covid-19 vaccine to staff at a state hospital in Hyderabad, India, on Friday. Photograph: Mahesh Kumar/AP

This week, the president of the European Commission, Ursula von der Leyen, said: “Vaccination is essential to get out of this crisis . . . However, we will only end this pandemic when everyone in the world has access to vaccines.”

We are going to be waiting a long, long time to end this pandemic then. World Health Organisation director-general Tedros Adhanom Ghebreyesus rebuked higher-income countries this week for vaccine hoarding. He pointed out that “more than 79 million doses of the vaccine have now been administered in at least 49 higher-income countries, while just 25 doses have been given in one low-income country”.

Are middle- and low-income countries to be content with the crumbs from higher-income countries’ tables? There can rarely have been a more shortsighted policy. Global travel cannot resume until some kind of herd immunity has been reached. This virus cannot be controlled unless it is controlled everywhere.

Canada is in negotiation with Covax to donate unneeded vaccines. While apparently generous, low-income countries should not be getting the leftovers

Israel has simultaneously been praised for rolling out its vaccine programme so quickly and excoriated for excluding Palestinians. Israel is accused of allowing a sink of potential infection to exist in its occupied territories, which is obviously folly, regardless of other questions.

It looks like some of those who are excoriating Israel are quite happy to be blind to the fact that high-income countries, of which Ireland is still one, are doing something similar to low-income countries.

It was notable that there was a huge discussion in Ireland this week about whether hospital directors should have vaccinated members of their own families but none at all about the ethics of sidelining the needs of low-income countries.

The European Union has set out ambitious targets for vaccination of 70 per cent of the entire adult population of each EU member by summer this year. Whether that is an achievable aim or not remains to be seen but what is certain is that low-income countries will be lucky to have achieved a fraction of that.

The United Nations’ flagship Covax programme, for which the EU has mobilised €853 million, is in deep trouble. The initiative which began last June was supposed to buy enough vaccines to cover 20 per cent of the population of low-income countries and when that target was achieved everywhere, to vaccinate still more.

It was undermined from the start by high-income countries advance buying so many doses of the vaccine for their own people that it left low-income countries far behind in the queue. Twenty per cent vaccination is functionally useless in terms of preventing surges, anyway. The Economist Intelligence Unit Africa estimatesthat in Covax-eligible countries, vulnerable populations will not be vaccinated until April 2022 and full vaccination will not happen until January 2024.

Canada has deals with seven companies conducting vaccine research, which, in the unlikely event that all of the vaccines are licensed, would mean that it could vaccinate its population five times over. It is in negotiation with Covax to donate unneeded vaccines. While apparently generous, low-income countries should not be getting the leftovers.

Let’s forget for a moment about the rights and wrongs of leaving the poorest people in the world who have the worst healthcare to face the brunt of this pandemic. Let’s look at what the world will look like if they cannot vaccinate their people.

Travel and migration will be drastically limited. Economic recovery will be slowed and the pandemic will drag on and on.

Companies should not automatically have the rights to sell to the highest bidder. The usual argument against flexibility around intellectual property rights and other technical knowledge is that there will be no incentive for pharmaceutical companies to do expensive and possibly fruitless research unless they are guaranteed to make a sizeable profit.

Yet public money was flung at this. Take AstraZeneca. It received $1 billion from the US health department’s biomedical advanced research and development authority alone in return for securing an initial 400 million doses. It received tens of millions from the UK as well. AstraZeneca appears to be one of the more ethical companies, at least when it comes to vaccine distribution, because it will sell the vaccine at cost, but only until it deems the pandemic to be over.

It still has the potential to make millions despite the fact that it received so much public money. The US government has given Moderna Therapeutics about $2.5 billion for research and development and to purchase doses once approved. Moderna has said it will not enforce patents on the vaccine for the duration of the pandemic but has not said the same for other essential know-how.