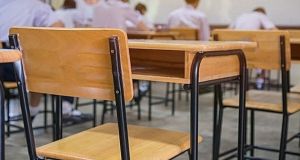 There is no push for reopening now. But in a few weeks’ time, once the crisis in the hospitals has passed the acute stage and infections are down, that will change. Photograph: Getty Images

A good week for America and for the world as the Trump era ended with a characteristic lack of grace, and something new and uncertain – but indisputably better – began. Hiems transit. Winter has passed.

An old pro, the new president Joe Biden will have limited expectations for a political honeymoon, especially with the country in such a state of degradation in so many ways. But for the first time in four years, the decisions the president takes will be made in what most of us would regard as good faith.

There is a great reluctance to order teachers and special needs assistants back to work against their will, in a situation which may present significant danger to their health, and perhaps that of their own families

Those decisions will not be easy. In his recently published memoir, former president Barack Obama writes a revealing passage on the nature of much executive decision-making in government. It’s worth considering:

“In such circumstances, chasing after the perfect solution led to paralysis. On the other hand, going with your gut too often meant letting preconceived notions or the path of least political resistance guide a decision – with cherry-picked facts used to justify it.”

Anyone who has worked in government – North or South – would recognise the picture. If all the decisions were black and white, so many of them say, it would be easy. But they’re not; the options appear in shades of grey, and often the light isn’t good.

The controversy this week over the return to school for children with additional educational needs was a pretty good example. Two legitimate interests; two compelling cases; a binary choice. Somebody gets their way, the other doesn’t.

The case of special needs children is urgent and deserving. These are some of society’s most vulnerable children and many of their families are in desperate situations, in need of urgent help. They have to get the schools back to alleviate not just current suffering, but in some cases, lasting damage to the children.

And yet, there is a great reluctance to order teachers and special needs assistants back to work against their will, in a situation which may present significant danger to their health, and perhaps that of their own families. There is also no certainty that if the teachers were ordered back to work, they would actually go, though I understand that option was seriously considered in Government.

It is a desperately hard decision. Poor old RTÉ, which is very good at giving airtime to both teachers’ unions and vulnerable students, was flummoxed. So was the Dáil, where deputies performed all sorts of contortions to avoid choosing one alternative over the other. They all insisted they backed both the special needs children and the teachers, and gave out about the Government. Of course.

But governing is ultimately about choices. Balancing the various interests, deciding where the public interest truly lies (rather than, perhaps, the interests of the public sector) and implementing a strategy to achieve it – this is the essence of governing. We can and should be cold and clear in our judgments on the politicians we elect to do this job; but we should be wise enough to realise that the choices they make are not straightforward. Beware those who insist policy choices are simple, or with no downside.

The public interest lies in an early reopening of the special schools, subject to teachers and special needs assistants with particular health concerns being exempted. Surely these staff could be vaccinated as a matter of priority?

Other choices await in the coming weeks. The Government will have to make an early decision on the Leaving Certificate. One senior figure in Government tells me that if the Leaving Cert students don’t go back in the next few weeks, they can forget about sitting the traditional exam.

Solidarity TD Mick Barry pointed out that a recent survey showed that 81 per cent of Leaving Cert students don’t want to do the traditional exam. Mind you, I suspect that’s probably the case every year. In fact, the number looked a bit low to me.

And then the question of the schools in general will need to be answered. There is no push for reopening now. But in a few weeks’ time, once the crisis in the hospitals has passed the acute stage and infections are down, that will change.

This is also a question of enormous political significance for the Government. Reopening the schools last September and keeping them open during the second lockdown in October was one of the things that convinced people the Coalition knew what it was doing. That perception has been shattered by the events of December and January. It won’t be rebuilt until the schools are back. The path to that objective will be paved with the sort of percentage decisions that perplexed Obama, and governments everywhere.