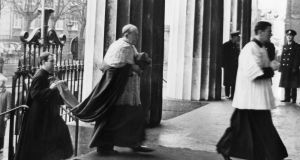 Archbishop of Dublin John Charles McQuaid arriving at the Pro Cathedral for the funeral of president Sean T O’Kelly in 1966. Photograph: Tommy Collins

The publication of the mother and baby home report coincides with the 50th anniversary of the resignation of John Charles McQuaid as Catholic archbishop of Dublin. McQuaid’s parting shot after 31 years in that position was his 1971 pastoral Contraception and Conscience: Three Statements.

The pastoral’s tone was sharp and angry, an indication that he was struggling with the growing disregard for the church’s teaching on this matter. He went straight for the jugular of the media and finished by declaring “in matters of faith and morals, the bishops speak in the name of Christ and the faithful are to accept their teaching and to adhere to it with a religious assent of soul”.

That was a typical McQuaid flourish, both cross and imperious. There are numerous such strident declarations woven through his voluminous archive. McQuaid was meticulous about his correspondence and recording his encounters and his grace was frequently displeased.

Often spiky, occasionally sinister, at time vicious and sometimes funny, his letters reveal much about his modus operandi and mindset. His correspondence with the Jesuit Roland Burke Savage in the 1960s was almost playful as Savage provoked his ire by trying to get him involved in ecumenical initiatives against his will: “I take your grace’s thunderbolt in my stride . . . I know that you are at your best in dealing with people who have put a foot astray”.

McQuaid eventually forgave Savage, but he was not prepared in 1968 to forgive what he called “the confusion here among upper class Catholics”. This was in relation to the notion, as bishop of Cork Cornelius Lucey expressed it in a letter to him, that “any one religion is as good as another”.

McQuaid passionately believed the Catholic Church was “the one true church” and that belief dictated so many of his words and actions. Given the range of his interventions and his ability to generate obedience from so many, including politicians, as revealed in the mother and baby home report in relation to adoption legislation, it is hardly surprising that the phrase “McQuaid’s Ireland” achieved much currency in the attempt to summarise his domination.

But such was the nature of his expanding diocese and ambitions to control a multitude from the 1940s that McQuaid needed obedient players on his team and his enforcers played a crucial role in maintaining his rule.

Neglect of her religious duties – Mass, the sacraments and prayer – is very often the cause of her fall. Repair of that neglect contributes very much towards her rehabilitation

It is instructive that Fr Cecil Barrett, for example, features in the recent report. Director in the 1950s of the Catholic Social Welfare Bureau established by McQuaid in the 1940s and champion of the so-called Catholic Protection and Rescue Society, Barrett is recorded in a memorandum sent to all the bishops and to the directors of Catholic adoption societies in 1971 as stating that a lay-run, non-denominational organisation “would have an utter lack of understanding of the nature of the unmarried mothers’ problems. Neglect of her religious duties – Mass, the sacraments and prayer – is very often the cause of her fall. Repair of that neglect contributes very much towards her rehabilitation”.

As McQuaid prepared to depart, this was a robust reiteration of the argument for sending women to mother and baby homes.

Barrett had also worked closely with McQuaid in relation to controlling adoption legislation. The report suggests the two men “strictly speaking” had no right to be involved in this, but that caveat is unwarranted, adoption should have been a matter for civil legislators.

Unfashionable as it is to point out now, McQuaid was not devoid of charity; indeed, he dispensed a lot of it. Historian Deirdre McMahon has warned of the inadequacy of “crude caricatures of hidebound Catholic reaction with which McQuaid has become identified since his death in 1973”.

He was a significant and often enlightened educationalist in the 1930s and as archbishop co-ordinated many welfare activities in his diocese in relation to clothing, fuel and housing. One of the reasons Éamon de Valera lobbied for his appointment was because he was impressed with McQuaid’s social concerns.

McQuaid devoted much time to services for those with alcoholism, mental and physical disabilities and the building of hospitals. The problem, however, as with the wider church in Ireland, was that McQuaid wanted all on his terms and had too much power which was abused, meaning “McQuaid’s Ireland” long outlived the man himself, who died in 1973.

The more reports that are published – including the Murphy report of 2009 that found McQuaid’s handling of sex abuse complaints in his diocese was “aimed at the avoidance of scandal and showed no concern for the welfare of children”– the more his defiant assertions stand as monuments to a damaging delusion.

When asked in 1965 if the Irish Catholic Church was obsessed with sex, he responded: “No. There is probably a saner attitude to sex in this country than almost anywhere else. Family life is stable, women are respected, and vocations are esteemed.”