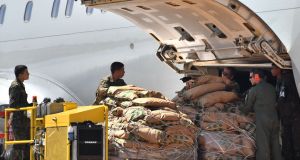 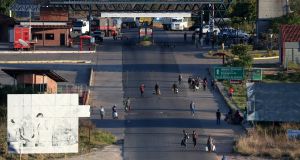 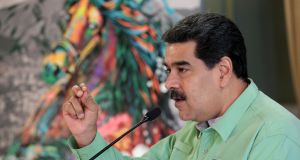 The political showdown convulsing Venezuela escalated into deadly violence at the border with Brazil on Friday, as security forces fired on a group of indigenous Venezuelans protesting against the government’s refusal to allow in aid deliveries from outside the country.

Witnesses and local officials reported the confrontation a day after Venezuelan president Nicolás Maduro, facing the biggest challenge of his political career, ordered all crossings at the Brazil border closed.

At least two civilians were killed and more than a dozen wounded in the confrontation with security forces in the Gran Sabana area, along Venezuela’s southeast border with Brazil, according to Américo de Grazia, an opposition politician from the state of Bolíivar. The Gran Sabana area is inhabited by the Pemón, an indigenous community.

The Venezuelans were protesting against the government’s determination to halt all deliveries of emergency food and medical aid into the country, which is suffering increasingly severe shortages. The opposition has vowed to deliver tons of donated humanitarian aid into Venezuela on Saturday, even against Mr Maduro’s orders.

In videos posted on Friday from Santa Elena de Uairén, a border town in the Gran Sabana region, dozens of military police holding shields could be seen blocking the roadway. A small crowd of protesters gathered, singing Venezuela’s national anthem and chanting: “They are killing us with hunger.”

The political opposition, led by Juan Guaidó, the head of the National Assembly who declared himself president last month, has vowed to forcibly bring in aid this weekend. He has the backing of foreign allies, led by the US. Mr Maduro has said Venezuela is not a country of “beggars” and does not need the aid, and has called Mr Guaidó a stooge of the Trump administration.

But once-prosperous Venezuela is reeling from its worst economic crisis ever, with deep-seated hunger, shortages and hyperinflation that Mr Maduro’s opponents have blamed on corruption and mismanagement.

The biggest potential flash point is the bridge at Cúcuta, Colombia, a major border crossing where Venezuelan authorities have blocked the lanes with tanker trucks and fencing. The US and other foreign powers have been stockpiling goods on the Colombian side of the bridge.

Venezuelan opposition leaders and their allies in Brazil were scrambling on Friday to find trucks and drivers to transport 500 kits of food and medicine that they hope to get across the border on Saturday. María Teresa Belandria, an opposition leader who serves as Mr Guaidó’s envoy to Brazil, said in an interview that some of the drivers they hoped to enlist for the plan had been held back by the armed forces in Venezuela.

Others, who were already in Brazil, have been threatened by allies of Mr Maduro with arrest, she said. “It’s been very hard to line up the trucks,” Ms Belandria said. “We’re coming up with a contingency plan.”

Ms Belandria said she still planned to lead a convoy of trucks carrying aid that would leave early on Saturday from the Brazilian city of Boa Vista, in northern Brazil, to Pacaraima, a border town roughly200km north. Brazilian police officials planned to escort the convoy until the border, where truck drivers would presumably attempt to cross.

Ms Belandria said that Venezuelan military vehicles had been positioned across the road to block the passage of vehicles and that security forces were forming a human shield. “It is a very tense situation,” she said.

If the trucks managed to get across, the opposition planned to offload the cargo on the Venezuelan side so aid packages could reach nearby communities. The amount of aid on hand would support the basic needs of about 2,000 people for a couple of months, Ms Belandria said.

While that might seem small, even successfully transporting a token amount across the border is seen by opposition activists as a powerful symbol that could lead to a more robust aid effort by land, sea and air. “If we manage to get aid through it will mean the armed forces have agreed to put themselves on the side of the constitution,” Ms Belandria said. – New York Times