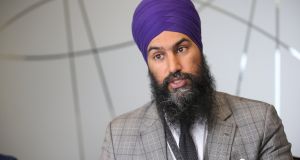 The leader of Canada’s left-of-centre New Democratic Party faces a key byelection on Monday that will decide whether or not he is able to challenge Justin Trudeau in October.

Jagmeet Singh, the first non-white leader of a major political party in the country’s history, must win the byelection in Burnaby, a city east of Vancouver, in order to get a seat in parliament and be in position to go up against the Canadian prime minister in this year’s general election.

While parties often decline to challenge a leader seeking a seat, both the Liberals, Conservatives and the newly-formed People’s party are running candidates in Burnaby South.

Mr Singh, the former human rights lawyer-turned-politician surprised his party – and the country – when he wrapped up the leadership race with a decisive first ballot win more than a year and a half ago. His quick rise in federal politics has excited voters across the country.

“His leadership can be seen as refreshing. People saw him as this very telegenic, easy-to-like guy, who might be able to compete on the celebrity level with Trudeau,” said Lori Turnbull, the director of Dalhousie University’s school of public administration.

But since his leadership win in late 2017, he and his progressive party have fallen into disarray. Sitting parliamentarians have resigned; others have indicated they won’t seek re-election. To make matters worse, the plurality of the seats currently held by the NDP are in Quebec, a province where support for the party has plummeted.

With party veterans fleeing, haemorrhaging finances and weak poll numbers, the rookie leader has the daunting task of salvaging and reconstituting the party, ensuring a battle-ready machine for the country’s election later this year.

Some of Mr Singh’s challenges can be attributed to his absence in the House of Commons: despite leading the party, he remains seatless.

“Because he doesn’t have a seat, he hasn’t really been given a lot of opportunity to indicate what his message is. He’s not in the house with the rest of the [leaders]” said Turnbull. While touring across the country seems like a good idea, she said,Mr Singh can’t be seen trading barbs with other party leaders.

Some feel that Mr Singh’s status as the first non-white leader of a major political party has also prompted unfair criticism of his tenure. While newly minted political leaders in Canada get “put through the wringer”, the treatment of Mr Singh has been disgraceful, said Rick Smith, executive director at the progressive Broadbent Institute and a former NDP staffer.

At the same time, the problems gripping the party are not Mr Singh’s alone.

The broader weakness of the party also raises questions about the future ambitions of the party in Canada’s left-of-centre politics. Long seen as the “conscience” of the country’s political system, the party increasingly has to compete against the Liberals to its right – and the Green Party to its left.

Monday’s test will be politically existential for Mr Singh: as he canvasses neighbourhoods, party members have said Mr Singh’s continued leadership is unlikely if he fails to win. – Guardian