Violence is main bone of contention in Catalan trial 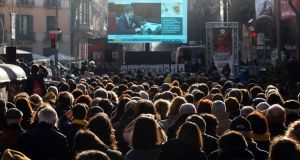 Following the trial of Catalonian leaders on a screen in Barcelona, on Thursday. The trial is being held at the supreme court in Madrid. Photograph: Enric Fontcuberta/EPA

Nearly two weeks into the trial of 12 Catalan independence leaders in Spain’s supreme court, the question of whether defendants employed violent methods in their 2017 bid for secession has emerged as a major cause of dispute.

Nine former members of the Catalan regional government are on trial, along with two former leaders of rank-and-file separatist associations and the former speaker of the Catalan parliament. They face a range of charges for their role in the failed independence drive, including rebellion, sedition, disobedience and misuse of public funds.

The trial, which began on February 12th, has so far seen the defendants face questioning from the seven-strong panel of judges, their own lawyers and the prosecution.

The most serious charge prosecutors have brought, against nine of them, is rebellion, which implies the use of violence. With the Catalan independence movement insisting it is peaceful, proving that the accused acted violently or instigated the use of force is a contentious issue.

“The independence movement in Catalonia starts from the bottom and goes up and there are political parties and organisations which take that ethos and try to give it a political, peaceful and democratic expression,” said Jordi Turull, former Catalan minister for the presidency, who is facing a possible jail term of 16 years, as he was questioned.

Unionist politicians have frequently rejected this version of events, claiming that the independence movement’s leaders have been responsible for violent incidents.

An event that has been under particular scrutiny is a demonstration in Barcelona on September 20th, 2017, 10 days before the Catalan government staged a chaotic independence referendum. Thousands of supporters of independence took to the streets as the civil guard were carrying out searches of Catalan government buildings. Several civil guard vehicles were damaged and prosecutors say demonstrators deliberately prevented officers from exiting one of the buildings.

Much of the prosecution’s case appears to hinge on whether defendants deliberately encouraged such actions. On Thursday, Jordi Sànchez, the former president of the Catalan National Assembly, who faces a possible 17-year jail sentence and has already been in preventive custody for 16 months, told the court that although he was present at the demonstration, at no point did he encourage “a riotous uprising by ordinary people”.

The Catalan government and the independence movement have portrayed the trial as politically motivated and lacking credibility, charges the Spanish authorities deny. On Thursday, many independence supporters took part in a general strike across Catalonia, endorsed by the regional government, to protest against the trial. Although the strike had less impact than many had expected, it was accompanied by large demonstrations in Barcelona and Girona.

The trial has also started to probe details surrounding the October 1st, 2017, referendum, which had been deemed illegal by Spain’s constitutional court.

Santi Vila, former Catalan business minister, told the court that he did not regard it as a binding vote but rather “a mobilisation in favour of independence” aimed at pushing the Spanish government into a negotiation. However, he added that expectations mounted among Catalans in the wake of the referendum to such an extent that their leaders were forced into making a declaration of independence.

“[W]e were sorcerers’ apprentices in the face of social media pressure, which called on us to follow through until the end,” said Vila, who faces charges of disobedience and misuse of public funds.

Vila opposed the Catalan parliament’s approval of the declaration of independence and he resigned in protest ahead of it, prompting many in the secessionist movement to identify him as a traitor.

Next week, some of the 500 witnesses summoned for the trial are due to be questioned. Among them is former Spanish prime minister Mariano Rajoy and former Catalan president Artur Mas, the politician who put the independence issue on the national agenda.

The trial, which is expected to take around three months, is likely to be taking place when a general election is held on April 28th.

On Sunday, Inés Arrimadas, leader in Catalonia of the unionist Ciudadanos party, plans to stage a political event in Waterloo, where the region’s former president Carles Puigdemont has been based since fleeing Spain. Although Arrimadas has ruled out meeting with Puigdemont, she has said she is going there to remind him “that the republic doesn’t exist and that he’s not president of anything”.