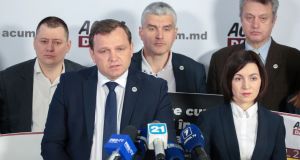 Andrei Nastase and Maia Sandu: Photograph: The Democrats, led by tycoon Vladimir Plahotniuc, claim to be the only pro-EU party that can stop the Socialists taking Moldova back into the embrace of Moscow.

The leaders of Moldova’s pro-western opposition movement suspect they have been poisoned on the orders of the country’s ruling party, which they warn will stop at nothing to retain power in Sunday’s parliamentary election.

Maia Sandu and Andrei Nastase say doctors can suggest no natural cause for the abnormal levels of mercury found in their bloodstreams for more than a year, and which have remained high despite medical treatment.

The politicians say they have revealed the issue on the eve of the election to highlight the danger that the governing Democrats pose to Moldova, which the European Parliament described last year as “a state captured by oligarchic interests”.

“We have a regime which is ready to do everything it can to stay in power, and we especially believe that the next few days will be very hot and may even get dangerous,” Ms Sandu told The Irish Times from Chisinau, Moldova’s capital.

The Democrats – who deny involvement in any poisoning plot – face a strong challenge from the pro-Russian Socialists and from the Acum (“Now”) alliance led by the Harvard-educated Ms Sandu and Mr Nastase, an anti-corruption campaigner.

Moldovan media on Friday published copies of their blood-test results from clinics in Chisinau and Germany, which Ms Sandu said showed mercury levels that were “three, four, five times higher than normal”.

“I’m telling you with all certainty – we are the target of vile attacks by a government that wants us dead,” Mr Nastase told Moldovan media. “Of course, for now they can’t do it like in Russia, with a shooting in the street. But that will happen soon enough if we don’t drive these bandits from government.”

The Democrats, led by shadowy tycoon Vladimir Plahotniuc, claim to be the only pro-EU party that can stop the Socialists taking Moldova back into the embrace of Moscow, its master during the Soviet period.

Western capitals are losing patience with the party, however, and last year the EU froze funding to Moldova after its courts used a technicality to cancel Mr Nastase’s victory in the Chisinau mayoral election.

In November, the European Parliament expressed “grave concern about backsliding in relation to democratic standards in Moldova” and warned that the rule of law was “being undermined by the ruling political leaders colluding with business interests and unopposed by much of the political class and the judiciary”.

Wedged between Romania and Ukraine, Moldova is one of Europe’s poorest countries, and in 2014 its economy was rocked by the theft of some $1 billion from three banks; few of the culprits were found and the money has not been recovered.

Moldova now does most of its trade with the EU after implementing a major economic pact with the bloc in 2016, but it still relies on Moscow for energy and about 500,000 of its 3.5 million citizens work in Russia.

The Socialists want closer ties with Moscow and, in a boost to the party’s election hopes, Russia has offered to wipe clean the migration records of the many Moldovans living illegally in the country – possibly 150,000 people – as long as they spend voting day in their homeland.

Moscow’s interior ministry on Friday accused Mr Plahotniuc, Moldova’s richest man, of involvement in illegally transferring the equivalent of hundreds of millions of euro out of Russia. The Democrats dismissed the allegations and accused Moscow of “very serious interference” in Moldova’s elections.

After a bruising campaign in which she says the government used smear tactics and intimidation against her party, Ms Sandu expects irregularities on Sunday. “If we have major vote-rigging, big fraud . . . then we will be bringing people on to the streets,” she warned.