Hillsborough pitch ‘like a battleground’ after crush, court told 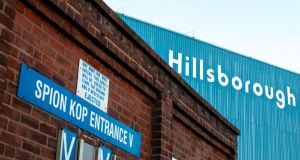 The mother of a teenage boy killed in the crush at Sheffield Wednesday’s Hillsborough stadium in 1989 has told a court the football pitch looked like a “battleground” as dead and injured people were pulled on to it.

Dolores Steele, whose son Philip (15) was one of the 96 people who died, was giving evidence on Friday at the prosecution of David Duckenfield, the former South Yorkshire police commander of the FA Cup semi-final between Liverpool and Nottingham Forest, and the former Sheffield Wednesday club secretary and safety officer Graham Mackrell.

Statements were also read to the jury of five people who survived, recalling the horror of being trapped in pen three of the ground’s Leppings Lane terraces.

Steele told the trial at Preston crown court she had gone to the semi-final herself on April 15th, 1989 to support Liverpool with her husband Les, Philip and his younger brother Brian, who was 13.

The boys had tickets to stand on the Leppings Lane terraces, while their parents had seats in the West Stand above it.

Questioned by Christine Agnew QC, for the prosecution, she said that at the 3pm kick-off time, she was distracted by seeing the crush below.

“It just didn’t look right at all, it suddenly looked very crowded down there,” she said.

“Somebody was carried on to the pitch and then I saw a jacket being put over that person’s face.”

She said she could hear people in the crowd below, shouting for the gates in the fences at the front of the pens to be opened, because people were dying.

“I seem to remember about four police officers standing looking in towards the pens, but nothing seemed to be getting done about it,” she said.

Then a gate was opened, she recalled, and people began to be carried out. “Suddenly the football pitch looked like a battleground, there were so many people out there lying round,” she said.

The Steeles then walked down from the stand, and met Brian, who was looking for Philip. A police officer gave them an emergency number to call,and then because there was a queue of “anxious people” at a telephone box, a “very kind lady” who lived nearby let them use her phone, but they could not get through.

“We were at our wits’ end at this time,” she said.

“We just did not know what to do.”

The local resident’s son drove the Steeles to Sheffield’s Northern General hospital, she said, while Brian stayed by their car at Hillsborough. At the hospital, a doctor read out descriptions of 11 people who had died, and a nurse showed her a bag of possessions which she identified as Philip’s, including his GBP6 ticket.

The family were then taken back from the hospital to Hillsborough, to the gymnasium at the football ground which, the jury has heard, was by then being used to keep the bodies of people who had died.

There, Les Steele was taken in to identify Philip.

Tim Knowles, one of the five Liverpool supporters whose statements were read to the jury, recalled meeting his friend Christopher Devonside, then 18, and Christopher’s father, Barry, outside a Gateway supermarket before the match.

Knowles described being unable to move or breathe, being “effectively paralysed from the neck down”, and said of the crush: “I thought that was the end of me.”

He fell unconscious for several minutes, and after waking up left by the gate at the front, and was later given oxygen by fire brigade officers in the gymnasium.

Another of the supporters, John Quinn, said in his statement that as the disaster unfolded: “Liverpool supporters were carrying people who were injured. It seemed to be the fans who were doing all the work; the police were doing nothing that I could see.”

Duckenfield (74) is charged with gross negligence manslaughter of 95 people who were killed. He is not charged with the death of the 96th victim, Tony Bland, who was kept on life support in hospital until it was lawfully withdrawn in 1993.

Under the law in 1989, no charge could be brought for a death that occurred more than a year and a day after the acts alleged to have caused it.

Mackrell (69) is charged with breaching a condition of Hillsborough’s safety certificate, and a duty under the Health and Safety Act.

Both men have pleaded not guilty to the charges.