Lawmakers in Venezuela scuffle with soldiers wearing riot gear in an attempt to allow humanitarian aid into the country. Video: Reuters 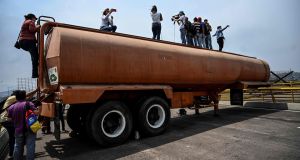 A tanker truck blocks the Tienditas bridge in Urena, Venezuela, on the border with Colombia, on February 20th, 2019. Photograph: Juan Barreto/AFP 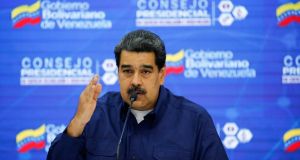 Venezuela’s president Nicolas Maduro: communist island of Cuba is his closest ally against the US. Photograph: Miraflores Palace/Handout 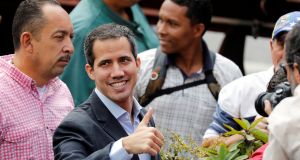 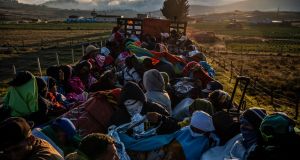 The crisis in Venezuela heads towards its latest D-Day on Saturday with the South American country now providing the stage for the latest round in one of the cold war’s leftover conflicts.

The closest ally Venezuela’s president Nicolás Maduro has in his battle to hang on to power is the communist island of Cuba. Facing off against them is the Venezuelan opposition leader Juan Guaidó whose decision to declare himself interim president last month was strongly backed by US foreign policy hawks who for decades have sought regime change in Havana.

The odds on this crisis stumbling into an armed clash between the two sides, a subject of intense speculation across the region, could become clearer on Saturday. Guaidó’s insurgent administration says it will finally launch an operation to bring humanitarian aid, which the US is stockpiling in the Colombian city of Cúcuta, into Venezuela to help ameliorate the social calamity there caused by the collapse of its economy.

Maduro has vowed to block the aid’s entry, dismissing the operation as a pretext for US military intervention. His security forces have blockaded the bridge Guaidó’s team hope to bring the aid over and drafted in pro-regime militias to prevent his supporters mobilising to receive it.

Caught in the middle of this stand-off is Venezuela’s military, along with Cuba one of Maduro’s last remaining props. Guaidó has ordered it to let the aid in, saying blocking it amounts to complicity in genocide, hinting that such a move could justify outside intervention. The Trump administration has echoed these calls and says all options, including military force, remain on the table.

Besides humanitarian relief, the aid operation is clearly trying to force Venezuela’s generals to split from the regime. “They are trying to psychologically break the Venezuelan high command so for now this is a psychological operation and not yet a military one,” says Prof Victor Mijares, a Venezuelan native and professor of international relations at the University of Los Andes in Bogotá.

The strategy faces various obstacles. First the Venezuelan high command is deeply complicit in the corruption and criminality of the Maduro regime. Its ousting would threaten its lucrative control over a range of activities from mining to cocaine trafficking.

Even more challenging, the Venezuelan military is one of the most spied on institutions in the world. Cuba’s long-standing support of the Chavista regime included help with setting up sophisticated counter-intelligence capabilities designed to identify and snuff out plots against it.

The alliance between Caracas and Havana was forged in the aftermath of the failed 2002 coup against Maduro’s predecessor and Chavismo’s founder, Hugo Chávez. With it he got guidance from Cuba’s famously skilled intelligence services. In return, Havana started to receive subsidised oil sales – some of it sold on at market prices to raise cash for desperately needed food imports – that helped pull an economy shattered by the collapse of its Soviet patron out of its long slump.

In recent years, the flow of oil across the Caribbean has diminished due to the economic collapse in Venezuela, but the alliance remains key for Havana. “Venezuela is the most relevant international relationship Cuba has and not just on questions of principles but because it is vital to its fuel and food security,” says Arturo Lopes-Levy, a former analyst with the Cuban interior ministry who now a lectures at Gustavus Adolphus College in Minnesota.

But this alliance brings risks for Havana. Its recent assertion that its 20,000 citizens in Venezuela are civilian and not military personnel, and calls for a global mobilisation behind the principle of non-intervention, betray signs it is nervous that any possible regime change in Caracas could embolden US hawks in their decades-old campaign against the communist island.

“They are worried,” says Brian Latell, the CIA’s former national intelligence officer for Latin America, who now lectures at Florida International University’s Jack D Gordon Institute for Public Policy. “I think the policy team in Washington calling the shots on Venezuela is very keen to install fear in the Cuban leadership.”

Such fears are partially based on the composition of that policy team.

Florida senator Marco Rubio, a son of the exiled Cuban community in Miami and a longstanding advocate of regime change in Havana, has the president’s ear on Latin-American affairs. US national security adviser John Bolton is another old foe of Cuba’s and oversaw the appointment of Elliott Abrams, a veteran of Washington’s dirty wars in Central America in the 1980s, as the administration’s point person on Venezuela.

Analysts warn such a team is unlikely to seek a negotiated solution to the crisis, especially one requiring Cuban input, and will instead look to break Maduro’s resistance. “They are closing in on a course that will take this to the extreme,” warns former Cuban government analyst Lopes-Levy. “Abrams has a record of conducting foreign policy in a very ideological and vindictive way. He has a clear record of rejecting any type of co-operation with Cuba even when it is clearly in US national interests.”

The question now exercising the region is what options short of military ones this hardline team will have left should Venezuela’s generals remain loyal to Maduro and his Cuban allies and refuse to let the humanitarian aid in from Colombia.

“I hope they have some contingency plans in mind about what to do if Maduro stands fast for a considerable length of time. I would certainly hope they have other possibilities including negotiations that would fall short of military intervention,” says former CIA officer Latell. “But I do not know of any voices in the administration that are counselling caution or flexibility. I don’t see much chance that our policy is going to soften.”