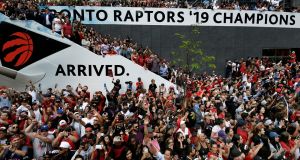 Fans fill the streets of downtown Toronto during the Raptors victory parade after defeating the Golden State Warriors in the 2019 NBA Finals, in Toronto, Ontario, Canada. Photograph: Moe Doiron/Reuters

Three arrests were made, according to Mr Saunders, who added that the investigation was ongoing.

A reported 1.5 million people parked Toronto’s downtown for the Raptors’ parade and subsequent rally at City Hall. The shootings occurred at Nathan Phillips Square, adjacent to City Hall. Additional people sustained minor injuries attempting to flee the scene after the shots were heard.

Mayor John Tory said in a statement, “It is disappointing and I’m sure a source of anger for more than just me that anyone would carry a gun and discharge it at what was otherwise a joyous celebration.

“I hope those responsible will be held to account to the full extent that the law permits. I want to commend and thank the millions of other people who happily and peacefully celebrated our beloved Toronto Raptors.”

Canadian prime minister Justin Trudeau were with the Raptors players on stage at the rally when the shots occurred. The festivities were briefly paused before resuming.

Mr Trudeau’s spokeswoman declined comment on the fact that the nation’s leader was nearby to a shooting.

The Raptors were celebrating their first NBA title, and the first by a Canadian team, four days after Toronto completed a six-game win in the NBA Finals against the two-time defending champion Golden State Warriors.