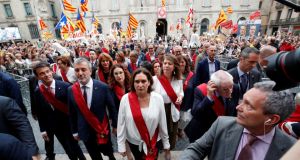 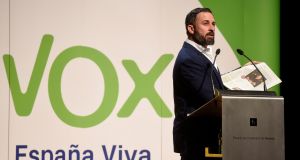 Santiago Abascal: ‘The efforts by Macron to treat Spain as if it were a province of France is only possible due to the submission of certain Spanish leaders.’ Photograph: Javier Blasco/EPA

As the dust settles on Spain’s recent electoral season, the country’s relationship with France has been in the spotlight. The day after last month’s European and local elections, which had followed an April general election, acting prime minister Pedro Sánchez flew to Paris to meet French leader Emmanuel Macron. The trip was widely seen as part of an attempt by Sánchez to cement his role as southern Europe’s leading social democrat.

But in recent days, France and its politicians have also been playing a part in Spain’s domestic politics.

Macron has been watching in alarm as Spain’s self-styled centrists, Ciudadanos, have formed a governing alliance in Madrid city hall with the Popular Party (PP) and the far-right Vox.

Although there is some confusion over how much input Vox will have in the new administration, it is expected to control some areas of the capital in exchange for its four votes that were key in removing the previous, leftist government.

“We won’t compromise on the idea that when you are a pro-European group you don’t work with the far right,” said Macron’s secretary of state for Europe, Amélie de Montchalin on Sunday, of the Madrid pact. She added that Macron’s En Marche party will “request clarification” from Ciudadanos.

Macron’s concern stems from the fact that En Marche is, like Ciudadanos, a member of the Alde liberal group, recently renamed Renew Europe, in the European Parliament.

Macron’s administration had issued another warning just hours before Ciudadanos signed off on the city hall deal. It had also expressed concern after Ciudadanos, the PP and Vox closed a similar agreement in the Andalucía regional parliament in December. Those three parties are now hoping to form a new administration in the Madrid region.

Vox, which wants tougher immigration controls, cuts to funding for women’s and LGBT groups and a reversal of historical memory legislation, has dismissed the French leader’s disapproval.

“The efforts by Macron to treat Spain as if it were a province of France is only possible due to the submission of certain Spanish leaders,” said Vox’s leader Santiago Abascal.

Ciudadanos has tried to avoid being seen to deal with Vox by letting the PP do most of the negotiating, a strategy that has failed to convince many Spaniards. The writer Almudena Grandes accused Ciudadanos of being “the trampoline the far-right needed in order to get a piece of power”.

Founded as a centrist party that aimed to counter nationalism in Catalonia, Ciudadanos successfully expanded nationwide half a decade ago. In April’s general election it won 57 seats, making it the third-biggest presence in parliament.

But recent events have exacerbated a division within the party, which describes itself as “liberal”, between moderates and hardliners. The latter, led by party leader Albert Rivera, are determined not to make pacts with Sánchez’s Socialists because they claim he has pandered to Catalan separatists and the leftists of Podemos. The former fear their party has drifted too far from the centre.

In an open letter to Rivera published last week in El País newspaper, a co-founder of Ciudadanos, Francesc de Carreras, rebuked the party’s leader for his refusal to help the Socialists form a new national government in the coming weeks. De Carreras described Rivera as a “petulant teenager” who is putting “supposed party interests ahead of the interests of Spain”.

Such post-electoral intrigue is not confined to Madrid. In Barcelona, an inconclusive election result meant that any one of several possible alliances could have taken control of city hall. The one that triumphed was the leftist coalition of incumbent mayor Ada Colau, with the support of the Catalan Socialists and former French prime minister Manuel Valls, who had run as an independent with the sponsorship of Ciudadanos.

Valls’s backing of Colau stunned the leadership of Ciudadanos, which sees the mayor’s position on Catalonia – she advocates the right to self-determination but not independence – as too close to that of the region’s nationalists.

Valls, like Macron, has voiced worries about Ciudadanos’s willingness to deal with Vox, and his relationship with the party has been tense throughout their brief alliance. On Monday it finally snapped, when Ciudadanos responded to Valls’s Barcelona bridge-building by breaking ties with him.

In explaining the decision, Ciudadanos spokeswoman Inés Arrimadas cited the fact that Colau had ordered a symbol offering support to imprisoned Catalan independence leaders, which had been removed during the election campaign, to be hung again from the front of city hall.

When asked about the French government’s concerns over her party’s cosiness with Vox, Arrimadas said: “Our European partners view favourably the centrist and liberal governments which Ciudadanos is a part of.” Macron, Valls and others may disagree.