‘He was towering over me. I was really scared,’ Dawn Dunning tells jury at trial 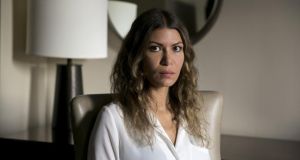 Dawn Dunning (40) told the jury at the New York supreme court how she had become very scared about what Mr Weinstein might do to her after she tried to get away from the room. “He was screaming. He was a big guy, and he was towering over me. I was really scared.”

Dunning, then aged 24, had come to an InterContinental hotel in Manhattan some time in 2004 to have what she had thought would be a business meeting with Mr Weinstein about her aspirations for a movie career. She was taken up to his hotel room by his assistant, she told the court.

Mr Weinstein appeared at the door of his hotel room, dressed in a white bathrobe with what looked like nothing underneath. On a coffee table were three sets of documents.

She laughed, thinking he was kidding, just part of his sense of humour. But when she turned to leave Mr Weinstein grew angry and started screaming at her.

According to Dunning’s account, Mr Weinstein shouted at her: “You’ll never be part of this business. This is how the business works. This is how actresses got where they are.”

Dunning is one of four witnesses who have been called by the prosecution to provide supporting evidence of Mr Weinstein’s alleged pattern of behaviour as a serial offender. In New York such witnesses are known as Molineux, or “prior bad acts” witnesses, signifying that they are not party to the actual crimes that are being charged in the case.

Mr Weinstein (67) faces five counts including rape and that he committed a criminal sex act. The “prior bad acts” witnesses relate to two counts of predatory sexual assault that carry the stiffest possible punishment – life in prison.

Dunning said she first met Mr Weinstein in a now defunct nightclub in the Meatpacking district of Manhattan where she was working as a waitress. They got to talking and the film producer, then at the peak of his power, said he could help her break into the industry.

They met several times to talk about opportunities and she had a screen-test at Mr Weinstein’s Miramax offices in New York. Then, a few weeks before the alleged incident at the InterContinental, he summonsed her to a boutique hotel in SoHo where Miramax was staging a movie in one of the rooms.

Dunning told the jury that she was taken to the room by the same assistant. Half of the suite was full of chaotic activity relating to the movie production, the other half was a bedroom.

Mr Weinstein led her down the hallway to the bedroom and they sat side-by-side on the bed, she said. “There were no red flags or alerts or anything that would make me suspect this would happen”.

Suddenly, he put his hand up her skirt. Crying in the witness seat and visibly distressed, Dunning said: “His hand went up my underwear, he was trying to put it in my vagina.”

She said she stood up in shock. “He started talking really fast. ‘It’s not a big deal, don’t make me feel bad about this, it’s not going to happen again.’ ”

In cross-examination, Weinstein’s team of defence lawyers pressed the witness hard about why she did not go public about the alleged assault in the SoHo boutique hotel until a few months before the trial opened. She told the jury: “I just didn’t want to be a victim, I just wanted to move on and forget it ever happened”.

Deploying a tactic that the defence lawyers have already used with other witnesses, they also asked Dunning about how she had contracted her own lawyer in recent months. She was asked whether she intended to sue Mr Weinstein after the criminal trial was over, and she replied “No”.

At the end of her testimony, Dunning told the court that before she met Mr Weinstein she had dreams of becoming an actor. After the two alleged incidents involving him, she no longer made any attempt to forge an acting career. – Guardian