Brexit may be official but difficult talks still lie ahead

The EU's chief Brexit negotiator Michel Barnier has used a speech at Belfast's Queen's University to warn that Northern Ireland will be the part of the United Kingdom worst hit by Brexit. Video: Reuters 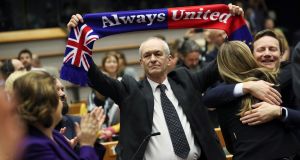 British MEP Richard Corbett holds a banner after a vote on the withdrawal agreement at the European Parliament in Brussels, Belgium, on January 29th. Photograph: Francisco Seco/Pool via Reuters

The European flag comes down from 10 Avenue d’Auderghem, at the heart of Brussels’ European quarter, at midnight on Friday.

Otherwise, little changes. The UK leaves the EU but remains in transition until the end of December, her citizens and businesses continue to enjoy all the rights of membership and access to the market, but do not sit at the decision-making table.

British politicians complain that this makes them rule-takers, without a say, but for the last few months they have been attending fewer and fewer EU meetings of their own volition.

On Wednesday, Barrow deposited the legal instrument to ratify the withdrawal agreement formally with the EU. Foreign secretary Dominic Raab described it as “the start of a new chapter for an independent sovereign Britain looking forward to a decade of renewal and opportunity ”.

And in the European Parliament, MEPs who voted the agreement through said their farewells and paid tributes to their British colleagues – the Europhiles among them – who are now redundant, many of them in tears.

Not so Sinn Féin’s Martina Anderson, also losing her job on Friday, who was on Wednesday expressing confidence that it would not be long before Northern Ireland would again be represented in the parliament by MEPs for a united Ireland. She is heading back to the North to participate in Border protests on Friday night.

The parliament’s Brexit steering group met on Monday and expressed concerns at whether the UK will adhere to its withdrawal agreement commitments, not least the checks on Northern Irish goods travelling in either direction across the Irish Sea, which the agreement makes clear, Boris Johnson notwithstanding, will be mandatory.

How the agreement will be enforced in the event of a dispute is crucial, with MEPs making it clear that adherence must be a precondition of any approval of a broader trade agreement.

Brexit may be happening for real at last, but that doesn’t mean the issue goes away – far from it. Many fear we will be facing another cliff-edge drama in a few months when the transition ends with or without a trade deal, whose negotiation will start within weeks.

Johnson is insistent that, come the deadline for seeking a talks extension in June, the UK will not be looking for one. And he has the majority to ensure that his hand cannot be forced by MPs.

Failure to reach agreement on what will be an enormously complex task is likely to mean a new trade relationship based on World Trade Organisation rules, border controls, tariffs, and quotas, and huge disruptions to supply chains and trade between Ireland and Europe.

On Wednesday, the commission got a first look at the formal mandate for such talks proposed by its talks co-ordinator Michel Barnier. It will make a formal decision only next week after the UK has actually left, but vice-president Andrei Sefcovic was insistent that the commission was ready to move at any “demanding schedule” the UK wanted to set.

He suggests that as soon as they begin we could see one negotiating round every three weeks.

Although the mandate still remains secret, it is understood to place a central emphasis on the idea of a trade “level playing field” reflecting common regulatory standards in the EU and the UK.

Divergence, a central demand by London, will be met inevitably by tariffs reflecting the degree of competitive advantage new UK standards would create.

The issue, officials here insist, is not about a vindictive EU being tough with the UK, but the perfectly usual protection of its market from unfair competition.

As well as talks on trade and security co-operation, the highly contentious issue of access to fishing waters is also certain to prove difficult. UK fishermen, although few in number, are politically extremely powerful.

Their demand to restrict and even prevent access by EU boats to UK fisheries is likely to prompt calls in return to block their access to the markets, which take the bulk of their fish.

A failure to reconcile both sides on the fish issue could block any wider agreement on trade.

The next six months of post-Brexit arguments could prove as difficult as the six months that have just passed.