White House warns John Bolton’s book may not be published 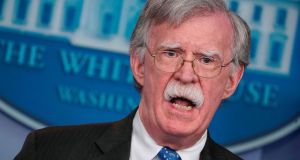 The White House warned that John Bolton’s book “may not be published” without the deletion of classified information, as senators continued to debate whether to call the former national security adviser to testify at Donald Trump’s impeachment trial.

In a letter to Mr Bolton’s legal team disclosed on Wednesday, the White House said that the ex-aide’s manuscript appeared to contain “significant amounts of classified information”, some of which was classified as “top secret”.

“Under federal law and the nondisclosure agreements your client signed as a condition for gaining access to classified information, the manuscript may not be published or otherwise disclosed without the deletion of this classified information,” a White House official said in the letter to a lawyer for Mr Bolton.

The letter from the White House national security council was sent last week, a few days before the New York Times reported on a central allegation in Mr Bolton’s book: that the president had held up military aid to Ukraine to press Kiev to announce an investigation into his political rival, Joe Biden.

Mr Trump took aim at Mr Bolton in the lead-up to Wednesday’s proceedings, claiming on Twitter that Mr Bolton had “begged” him for a job in the White House and was making “nasty & untrue” allegations in his manuscript that violated “classified national security”.

The ex-adviser did not respond directly to the president’s accusations on Wednesday but liked a tweet that referred to Mr Trump as “a moron”.

....many more mistakes of judgement, gets fired because frankly, if I listened to him, we would be in World War Six by now, and goes out and IMMEDIATELY writes a nasty & untrue book. All Classified National Security. Who would do this?

The impeachment trial entered a new phase on Wednesday. Senators will have 16 hours, spread out over two days, to question impeachment managers from both sides.

Questions must be submitted in writing and will be read aloud by John Roberts – the chief justice on the supreme court who is overseeing the trial. Mr Roberts has asked the prosecution and the defence to cap their answers at five minutes.

Once the question-and-answer session concludes, senators will debate whether to call witnesses – specifically Mr Bolton. They are expected to vote on the issue on Friday.

White House lawyers have argued vociferously against calling Mr Bolton as a witness – a possibility that could also open the door to Republicans’ demand to hear from Mr Biden or his son Hunter, who previously held a lucrative board position with Burisma, a Ukrainian oil and gas company.

Some senior Republicans have said they would like to hear from the Bidens, and reports have emerged that some members of the party might favour a “witness-swap” – under which Mr Bolton would be called in exchange for Biden testimony.

Asked on MSNBC if he saw Hunter Biden as a “relevant witness” in the trial, Joe Manchin, the middle-of-the-road Democratic senator from West Virginia, replied: “I think so. I really do.”

He continued: “I think that he could clear himself, from what I know and from what I’ve heard. But being afraid to put anybody [on the stand] who might have pertinent information is wrong – no matter if you’re a Democrat or Republican.”

Democrats need 51 of the 100 senators to vote to call more witnesses in a chamber where Republicans hold a 53-47 majority. To convict Mr Trump and remove him from office, Democrats would need 20 Republican votes – a highly unlikely outcome.

Nevertheless, the testimony of Mr Bolton could be potentially damaging to the White House from an optics standpoint.

It would also mean that Mr Trump’s impeachment trial would likely still be going on when Mr Trump delivers his annual State of the Union address next Tuesday. Were the trial to finish by then and the Senate acquits Mr Trump, it would allow the president to use the address to tell the nation he had been exonerated. – Copyright The Financial Times Limited 2020