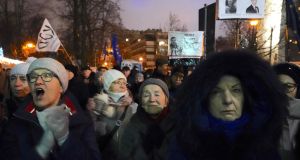 The stand-off over Polish court reforms ramped up further on Friday after the European Commission asked the EU’s highest court to dismiss a new package of measures it fears undermine judicial independence.

Poland’s parliament and supreme court have stepped up their own battle over the reforms. On Thursday the national conservative Law and Justice (PiS) government used its parliamentary majority to push through the new measures, overturning a block by the opposition-controlled upper house, the Senate. The new Bill is now to be signed into law by President Andrzej Duda.

Simultaneously, Poland’s supreme court, where many reform-critical judges sit, ruled that decisions made by some judges appointed under the new, reformed court regime are questionable.

The supreme court decision has had an immediate effect, with judges across the country postponing cases fearing the legal certainty in which they operate.

In retaliation, ruling PiS figures have promised to refer the supreme court ruling to the constitutional court, presided over by a judge that PiS leader Jaroslaw Kaczynski refers to as a “close friend”.

After more than four years of stand-off, a widening legal schism is opening up in Poland.

As guardian of the treaties, the European Commission has asked the Luxembourg court to intervene because it fears the Polish reforms question the precedence of EU over national law.

The most recent reforms allow the punishment of judges involved in “political activity”, as well as fines or even dismissal of any judge who questions the legitimacy of judges appointed by new and reformed bodies.

Earlier reforms created a new body to discipline judges and brought the judicial appointments process under direct parliamentary control. PiS says the reforms are about streamlining the administration of justice and boosting courts’ democratic accountability, by banishing lingering communist-era cronyism.

The government has ignored a supreme court ruling from last month setting aside many judicial appointments and the disciplinary body of the new regime. Critics believe the government is trying to politicise the courts and secure favourable rulings by making judges beholden to government.

Next week, the values and transparency commissioner Vera Jourova, the most high-level official on the rule of law in Brussels, will travel to Poland.

“The commission is very concerned about the rule of law situation in Poland,” said Christian Wigand, commission spokesman, “in particular regarding the final adoption amending the law of ordinary court.”