Matteo Salvini fails to cause upset in Emilia-Romagna election 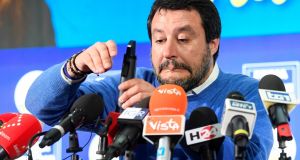 Leader of Italy’s far-right League party Matteo Salvini in Bologna on Monday. He said he was happy to have run a competitive campaign in a region that has voted for the left since the end of the second World War. Photograph: Flavio Lo Scalzo/Reuters

Matteo Salvini’s attempt to trigger a crisis for Italy’s coalition government by seizing control of the left-wing region of Emilia-Romagna has failed after a right-wing coalition fronted by his anti-migration League party was defeated by the centre-left Democratic party.

The Democratic party (PD) candidate Stefano Bonaccini gained 51.4 per cent of the vote, putting him ahead of the right-wing coalition fronted by the League senator Lucia Borgonzoni on 43.7 per cent.

The result will provide a welcome respite for Italy’s fragile PD-Five Star coalition government led by prime minister Giuseppe Conte and reduce the likelihood of snap elections that Mr Salvini was seeking in order to capitalise on the national popularity of his League party.

The defeat turns what Mr Salvini was hoping would be a large upset for the Italian government into one for his own party. Opinion polls leading up to the vote suggested the race would be far closer than it turned out to be, which prompted the League leader to invest vast energy and resources into the campaign.

Mr Salvini throughout the campaign sought to turn the Emilia-Romagna regional vote into a national referendum on the ruling coalition, and argued that if the right triumphed then new general elections should be called.

The chances of the snap national vote Mr Salvini has been pressing for since bringing down Italy’s government in August now appear distant, with the defeat halting the momentum that has seen the Italian right win a string of regions away from the PD over the past 18 months.

Nicola Zingaretti, leader of the PD, said the result was a personal defeat for Mr Salvini, and said his party’s coalition government with the Five Star Movement would “continue its plans to relaunch the country”.

“Salvini has lost this election,” Mr Zingaretti said, as he praised the impact on the race of the so-called Sardines grassroots anti-Salvini protests that began in Emilia-Romagna at the end of last year.

Mr Salvini said he was happy to have run a competitive campaign in a region that has voted for the Italian left since the end of the second World War. “Having an open match in Emilia-Romagna is an emotion for me, there was a match for the first time in 70 years,” he said.

Opinion polls have consistently shown that his League party is the most popular across Italy, but Mr Salvini has been unable to capitalise on this lead with a new vote, with the leadership of the PD and Five Star unwilling to risk a general election.

The result was not all good news for the ruling coalition however, with the Five Star Movement candidate taking 3.4 per cent, a painful collapse for a party that was the largest in Italy in general elections held in 2018.

Voter turnout in Emilia-Romagna was high, highlighting the way the local contest had taken on a national significance, at a level of 67 per cent, compared with 37 per cent in the region’s previous elections in 2014.

Its re-elected president, the 53-year-old Stefano Bonaccini, has enjoyed one of the highest approval ratings of all Italian regional leaders. He has opted to distance himself from the national PD – using green instead of red as his campaign colour – in order to focus his campaign on local issues. – Copyright The Financial Times Limited 2020