Campaign to ring Big Ben on Friday has been called off 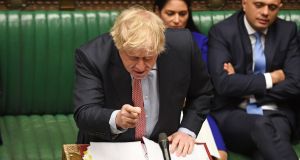 Britain’s prime minister Boris Johnson says he will be mindful of the feelings of those who regret Brexit. Photograph: Jessica Taylor /AFP via Getty Images

Boris Johnson has promised to mark Britain’s exit from the European Union on Friday in a “respectful” way that is mindful of the feelings of those who regret the move.

“What I will be doing is, in common with everybody else, I will be making a dignified exit from the European Union. I will be celebrating in a way that I hope is respectful of the scale of the event, that does justice to the astonishing feat that Britain has accomplished but also is mindful of everybody’s feelings about what we are doing. It is a great moment for our country, it is a moment of hope and opportunity but it is also, I think, a moment for us to come together in a spirit of confidence,” he said during a “People’s PMQs” on Facebook.

Mr Johnson was speaking as the European Parliament voted to approve the withdrawal agreement, removing the last obstacle to Brexit. He will make a statement at 10pm on Friday, an hour before Britain formally leaves the EU. But a campaign to ring Big Ben, which has been silent for months due to renovations, at the moment of Brexit was called off this week after parliamentary authorities said they could not accept crowdfunding to cover the £500,000 cost.

Nigel Farage will speak at a rally in Trafalgar Square on Friday night but no government ministers or senior Conservatives are due to attend. Jeremy Corbyn will make a statement about Brexit on Friday but his spokesman said “there will be no tears” from the Labour leader.

“Everyone accepts that we’ll be leaving the EU on Friday . . . We will be fighting for the best possible future for Britain post-Brexit and using the possibilities that arise out of leaving the EU in the most progressive way,” the spokesman said.

Michael Gove, chancellor of the Duchy of Lancaster and one of the leaders of the Vote Leave campaign, said that leaving the EU meant that British ministers and officials would now have to take responsibility for their own decisions.

“Documents would cross my desk, I’d be asked whether or not I thought something was a good idea. I would occasionally say I’m not sure this is a good idea and then I was told, well, there’s nothing you can do about it, this is an EU law. That’s going to change, it’s going to end. And as a result, actually, there won’t be a hiding place for politicians like me,” he told the BBC.

“I can’t blame Europe for unemployment or any of the policies that this government might be responsible for. And in that respect, Brexit means that politicians are no longer able to run away from the voters.”

The Scottish Parliament voted on Wednesday by 64 to 54 to hold a second independence referendum, although a legally binding poll requires Westminster’s approval too. First minister Nicola Sturgeon will make a speech on Friday setting out the next steps in the campaign for Scottish independence.