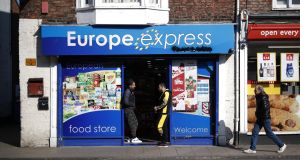 Locals chat at a food store in Boston, England. The town, in Lincolnshire, voted by a 75 per cent majority to leave the European Union in the 2016 referendum, giving it the highest proportion of Brexit voters in the UK. Photograph: Darren Staples/Getty

In Boston, Lincolnshire 75.6 per cent voted to leave the EU, the highest leave vote in Britain, but most people I speak to express relief rather than joy that it’s finally happening.

“A lot of pubs are having parties,” says Leanne Walker, who is in the midst of washing up in Crumbs Café.

“Most of the people we know voted ‘leave’,” says Jayne Shinn, also washing up. “But we’re sick of hearing ‘Brexit, Brexit, Brexit’.”

Why did they vote leave? Everyone says “immigration”. There are 65,000 people living in Boston and according to the 2011 census, 13 per cent of them are migrants, largely from Eastern Europe, drawn here to work in the polytunnel farms and factories around the town. More recent estimates suggest the foreign born population of Boston is up to one in five.

“They don’t mix,” says Jayne Shinn, also washing up. “They go to their own shops and send their money home.”

Will Brexit change things? “It will hopefully reduce the numbers,” says Robinson. “I’m not saying they’re all the same.”

What about those who say that immigrants are necessary for all of the farms nearby?

“Before they all came our local men did that work,” says Shinn.

“But would they do it now though?” asks Robinson. “They don’t work like that anymore.”

“I used to work on the land,” says Michelle Casey, another employee. “It was hard.”

“So did I,” says Shinn. “What do you think ladies?” she asks two older women who’ve come to the counter to pay their bill.

“Nowadays, you wouldn’t get the young people out of bed,” says Lorraine Wiseman. Her friend, Pauline Cooper, nods in agreement. I explain that I’m asking what will happen if the migrants leave. They change their minds quickly.

“We didn’t need migrants years ago and we don’t need them now,” says Wiseman.

“The ones who are here won’t really go back,” says Carol Rate, the owner of the café.

“We should make them go back,” says Cooper, darkly.

Anton Dani, the Moroccan-born mayor of Boston, believes Brexit day is worth celebrating. On Friday he’s welcoming the crew of Good Morning Britain to his café, Café de Paris. He entered politics after a speech he gave on Question Time lamenting a lack of integration in Boston (a report from the centre right Policy Exchange think tank has since found it to be the least integrated town in Britain). He subsequently became a UKIP counsellor but has since joined the Conservative party.

For Dani the leave vote was about “dignity and sovereignty”. Europe took Britain for granted, he says, and they will still need to trade.

“Don’t laugh, but I watch Eurovision, 90 per cent of the contestants sing in English. They’re using our language but still they don’t give us any points. Europe wants to use us, but they don’t like us.”

Why was leaving important to Boston? “The government hasn’t really supported the influx of migration that came to Boston. The infrastructure was hit very hard.”

That said, he thinks there are misunderstandings. He knows some voters believed a leave vote would lead to migrants being sent home, whereas, he says, “controlled migration” is economically necessary. He had an argument recently with a constituent who was angry that foreigners still lived there. He sighs. “Brexit is not a magic wand. But on Friday the 17.5 million who voted for Brexit will have their day.”

In the Kathmandu costume shop and sex shop, Cerry Fletcher tells me she can’t wait to celebrate Brexit day. Her main worry is crime, which many in Boston blame on migrants. The percentage of serious crime in Boston is in keeping with the national average, but Fletcher says she is frequently harassed by drunk men on the street. She doesn’t want to malign all immigrants, she adds.

“I’m an immigrant myself.” She came from Ireland as a baby and is named after County Kerry. “It’s spelled with a ‘C’ because my granddad was drunk when he registered it.”

Over at the market, Alan Clarke who runs a stall called Destiny, Dragons and Dreams selling “mystic gifts” voted ‘leave’ for reasons of national sovereignty. He’s less concerned with immigration than others I meet. “But the politicians have wasted so much time.”

Does he believe in mysticism? He says the mysticism is largely his wife’s thing, but he believes in “the healing crystals . . . I’ve seen them work. Anything you believe in can work.” He laughs. “Like Brexit. It has to work.”

Fishmonger Carl Edwards is the only remain voter I meet in Boston. “Brexit is the biggest mistake this country ever made,” he says. “But that view wouldn’t make me many friends here. My peers have told me we must leave and I must accept that. I think it’s turned us into a very racist, insipid nation.”

Polish financial adviser Iga Paczkowski runs a business called “Lincs-EU” which she characterises as an unofficial citizens’ advice bureau. She was deeply disappointed by the referendum results. But everyone was disappointed, she says, even those who voted for it.

“They expected that we [Poles] would magically disappear and because that didn’t happen, they began to be more open about their feelings.”

Poles have been here since Polish pilots were here during the war, says Paczkowski, but they’ve stopped coming now. The rules about residency keep changing so even though she has “indefinite leave to remain” she feels insecure.

“People are saying it’s ‘us and them’ but there is no ‘us and them’. Those who tell me to go home: This is my home. Please don’t ask me to leave.”