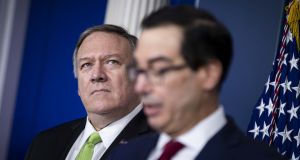 US secretary of state Mike Pompeo listens as treasury secretary Steven Mnuchin speaks during a briefing at the White House in Washington DC on Friday. Photograph: Al Drago/Bloomberg

The new restrictions – flagged by President Donald Trump this week as retaliation for the Iranian attack on military bases housing US soldiers in Iraq – will place significant pressure on the country’s already struggling economy.

Among the individuals targeted are the secretary of Iran’s Supreme National Security Council, and the head of the Basij militia, part of the Islamic Revolutionary Guard Corps.

Several steel, aluminium and other metal manufacturers have also been hit, as well as other entities, such as a Chinese shipping vessel and company.

Announcing the new measures at the White House, treasury secretary Steve Mnuchin said the sanctions would deprive the Iranian government of billions of dollars.

Secretary of state Mike Pompeo said the US just wanted Iran “to behave like a normal nation”, warning that the US would continue to apply sanctions “until Iran stops its terrorist activities and commits that it will never have nuclear weapons”.

Friday’s measures come on top of punishing sanctions on the country’s oil, shipping, finance and other industries imposed by the US since its withdrawal from the 2015 nuclear deal.

Mr Pompeo also reiterated his contention that the US had “specific information on an imminent threat” when it decided to target top Iranian commander Qussem Suleimani in an air strike a week ago.

“Those threats included attacks on US embassies,” he said. “Suleimani was plotting a large-scale plot . . . against American facilities, including American embassies, military bases,” though he added he did not know “exactly which minute . . . which day it would have been executed”.

His comments came a day after Mr Trump said that the Iranian commander had been planning to attack a US embassy, disclosing the most detailed information yet about the intelligence that led to the attack.

Amid ongoing concern from Democrats and some Republicans about the rationale behind the deadly air strike in Baghdad airport which set in motion a series of events over the past week, including the attack on US troops in Iraq, the Democratic-controlled House of Representatives passed a resolution late on Thursday to restrict the president’s activities in Iran. The Senate is unlikely to progress a similar resolution, however.

The office of the Iraqi prime minister said on Friday that it had requested the US to start planning its troop withdrawal from the country. Last Sunday the Iraqi parliament voted to expel foreign troops from the country, though the resolution was non-binding.

According to Baghdad, prime minister Adil Abdul-Mahdi asked Mr Pompeo in a phone call on Thursday to “send representatives to Iraq to put in place a mechanism for implementing the parliament’s decision for the safe withdrawal of forces from Iraq”.

Meanwhile, Nancy Pelosi, the speaker of the House of Representatives, told members of her party in a letter on Friday that she would move to transfer articles of impeachment against the president to the Senate next week.

Ms Pelosi has defied calls from Senate Republicans, and a growing number of Democrats, for her to pass the impeachment articles to the Senate to trigger the next stage of the process.

Mr Trump became only the third US president in history to be impeached last month when he was charged with abuse of power and obstruction of Congress over his dealings with Ukraine.