US House votes to limit Trump’s powers to attack Iran

US Wrap: Vote comes as president claims Iranians were planning to blow up embassy 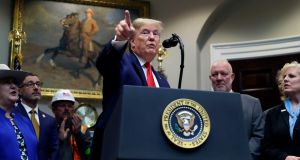 US president Donald Trump at the White House on Thursday: ‘I will say this, we caught a total monster. We took him out. That should have happened a long time ago.’ Photograph: Evan Vucci/AP

The US House of Representatives adopted a resolution limiting the US president’s powers to engage in hostilities with Iran on Thursday night, as the fallout from Wednesday’s attack by Iran on US troops continued.

The resolution – which is unlikely to progress in the Senate or be signed into law by the president – reflects continuing unease in the Democrat-controlled House of Representatives about the Trump administration’s decision to kill top Iranian commander Qassem Suleimani a week ago, plunging the Middle East into uncertainty.

Speaking before Thursday’s vote and debate, House speaker Nancy Pelosi said the “cavalier attitude of this administration is stunning. I do not believe in terms of what is in the public domain that they have made the country safer by what they did,” she said.

The resolution called for the president to “terminate the use of United States Armed Forces” against Iran without congressional authorisation, except when necessary to “defend against an imminent armed attack”.

Mr Trump proffered further details of the decision-making behind the move to target Suleimani, one of Iran’s best-known figures, at an event at the White House on Thursday, claiming that the Iranians “were looking to blow up our embassy”.

“We also did it for other reasons that were very obvious. Somebody died, one of our military people died, people were badly wounded just a week before.

“I will say this, we caught a total monster. We took him out. That should have happened a long time ago.”

But members of Congress – from both the Democrat and Republican side – have expressed dissatisfaction with briefings that were provided by members of the Trump administration this week.

Two Senate Republicans – Mike Lee of Utah and Rand Paul of Kentucky – were strongly critical. Mr Lee said the briefing was “probably the worst” he had received on military matters, describing it as “insulting and demeaning”.

“One of the messages we received from the briefers was, ‘Do not debate, do not discuss the issue of the appropriateness of further military intervention against Iran,’ and that if you do, ‘You will be emboldening Iran,’” he said.

But US vice-president Mike Pence defended the administration’s actions in a series of media interviews on Thursday. “Some of the most compelling evidence that Qassem Suleimani was preparing an imminent attack against American forces and American personnel also represents some of the most sensitive intelligence that we have – it could compromise those sources and methods,” he said.

During the debate before Thursday’s vote, Democrat Jim McGovern explained the rationale for the resolution. “We are deeply concerned that we may end up in a war inadvertently here, and that Congress will have no role in it,” he said.

But Republicans defended the president. “I agree with the president that attacking Americans is never acceptable and Iran should be held to account,” said Republican Ann Wagner of Missouri.

1 Nearly 400 Brazilians have tested positive for Covid-19 in Ireland, data shows
2 Covid-19: Pressure over breakdown in tracing system intensifies as State enters Level 5
3 One hundred Irish retailers for all your online Christmas shopping
4 Life under Level 5: Where can I go, who can I see, what is closed?
5 Des Bishop apologises to Traveller community for comments in interview
Real news has value SUBSCRIBE