Australia: ‘It’s like the fire is a sentient being. It feels like it’s coming to get us’

Towns that already burned once are threatened again, pushing residents beyond crisis mode 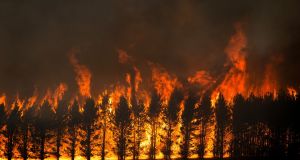 The Dunns Road fire crowns the tops of trees near Maraglem, on Friday. The relentless fires have burned over 6 million hectares, killed at least 24 people and destroyed some 2,000 homes. Photograph: Matthew Abbott/The New York Times

Surrounded by hills burned black as soot, with homes flattened and cattle decimated, Australians in the country’s east on Friday confronted a new round of supercharged bush fires as high winds drove the fires back toward towns that had already burned at least once before.

Areas of Victoria state and South Australia were under evacuation orders. In Batlow, an apple-growing town in New South Wales that barely survived a day of 15m flames last Saturday, residents who had only just been allowed to return scrambled to figure out what was lost and how to protect what remained.

“It’s like the fire is a sentient being,” said Sulari Gentill, a novelist with a husband and a son who are volunteer firefighters in Batlow. “It feels like it’s coming to get us.”

The sheer relentlessness of the fires – which have burned more than 6 million hectares, killed at least 24 people and destroyed about 2,000 homes – is increasingly pushing Australia beyond crisis mode into a jumble of contemplation, anger and traumatised fatigue.

This is especially true in the dozens of places enduring repeated threats, where firefighters and beleaguered residents are caught in a smoky, delirious in-between. Neighbours hug and shake their heads, wondering why one house went up in flames and the one next door did not, then ask who has enough water to share for a spray-down of the roof.

They smile at the chirp of a bird, a sign of normalcy not heard by some since the terrible fires of New Year’s Eve, then struggle to determine the day of the week, saying they feel jet-lagged.

For many, the fires have become villains that stick around long enough to reveal their personalities. Firefighters swear at them for their cunning unpredictability, while those who have seen them first-hand marvel at their destructive power.

Linda Carney, a resident of Buchan, a small town about 320km east of Melbourne, described how she watched from her veranda as the “dirty great glow in the sky” approached her home. A firestorm from a few days ago combined several blazes right in front of her. It threw off a column “like an atom bomb”, she said, “then dropped the ash back down”.

“We didn’t have time to get scared,” said her husband, Robert Carney. Linda Carney added: “You don’t even think about being scared.”

On Friday morning, though, as dangerous conditions were forecast across Victoria, she admitted she was nervous. “It’s really smoky; I can’t see a thing,” she said.

They had already lost their house to the fires. They are sleeping on their property in a horse trailer to protect their dogs, horses and cattle. They are not alone in their hardy determination to stay. Many others report remaining in place or returning to towns that are scorched and still at risk out of concern for animals or fear of looters, or to see and deal with damage.

In addition to the houses burned to the ground are many others with lesser havoc – a shed or cars reduced to steel skeletons, cherished mementos gone up in flames, water pipes and wires melted into tangled knots.

“We’ve got no electricity, no water,” Marjukka Niemi said as she picked up free food and water at a community centre in Batlow on Friday morning. “We’re trying to freeze water bottles in other people’s freezers.”

Another community centre, in Sarsfield, Victoria, offered food, water and the opportunity to have a “chat” and a “cuppa”. Residents of the town, where dozens of houses were flattened by fire last month, streamed into the centre on Friday.

“People just want to talk; they are traumatised,” said Rod Thomas, a local volunteer. He said he planned to stay in Sarsfield to defend his house. “I’m ready for it,” he said, adding: “Fire is fairly haphazard.”

By early afternoon, the fires had nonetheless begun to surge. Winds pushed beyond 88km/h in some areas as heat scratched into the back of the throat. On Kangaroo Island, where ecologists worry that the fires may kill off unique and endangered wildlife, officials reported that half of the island had burned, up from a third earlier this week.

Farther north and west on the mainland, temperatures climbed close to 37 degrees across a wide swathe of the Snowy Mountains, which stretch across hundreds of miles from New South Wales south to Victoria, creating conditions that were similar to what occurred over the New Year’s Eve weekend.

Calls reporting spot fires in Batlow started to come in. New South Wales fire officials reported that a pair of blazes nearby were about to merge and that lightning strikes had started new fires farther north. Authorities in Victoria also added several towns to emergency notices, with about a dozen deemed to be too dangerous for anyone to stay – including Buchan, where the Carneys had hunkered down.

On the road leading to the town, Mason Johnson had been trying to make his way home to deliver hay and materials to build a yard for stranded cattle when his engine gave out. With Buchan having been burned already, Johnson said he doubted it would take another hit. But now, stuck on a stretch of road with unburned trees and a highly unpredictable fire, he was getting anxious. “It’s not going anywhere,” he said of his truck.

Officials nonetheless suggested the day’s conditions might not prove quite as challenging as they did a week ago, with an expected wind shift and a drop in temperatures. Additional emergency resources have also been deployed. Across rural New South Wales, the army has become more visible, with water deliveries to residents and bulldozers lined up to help to create containment zones. Planes and helicopters soared through the haze in advance of the fires’ peak, dropping fire retardant on vulnerable areas.

It feels evil,' said Brigitte Mitterer, who lives in Clifton Creek, a town in Victoria that has already been hit by fire

The prime minister, Scott Morrison also announced on Friday that there would be a thorough review of the fires and the government’s response. But he stopped short of pledging to act more aggressively on cutting heat-trapping emissions or making plans to accelerate Australia’s efforts to adapt to climate change.

With protests against him on Friday evening in Sydney and several other Australian cities, Morrison appeared on a conservative radio show for an interview, where he was told by the host that he was already doing too much to address climate change. It was a sign of the political divisions that have made Australia a climate change laggard despite its extreme vulnerability to global warming.

But in towns where the smell of smoke is overpowering, where street signs are melted and orchards charred, politics mattered less than the moment: The fires were all that anyone could talk about.

“It feels evil,” said Brigitte Mitterer, who lives in Clifton Creek, a town in Victoria that has already been hit by fire and was again, in the possible fire line on Friday afternoon and evening.

“We’re all on edge,” said Deb Wiltshire (52), the owner of a cafe in Batlow that is closed because of fire damage. “You think it’s over and done, then you get told it’s on its way back.” – New York Times