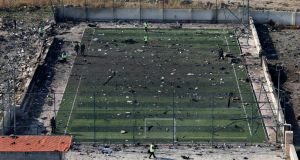 Rescue workers search the scene where a Ukrainian jet crashed in Shahedshahr, southwest of the Iranian capital Tehran on Wednesday. Photograph: Ebrahim Noroozi/AP

Kiev has said it is still unclear whether Iran shot down a Ukrainian airliner this week, killing all 176 people onboard, as more top western officials said a missile strike probably caused the disaster and Tehran dismissed such a scenario as “impossible”.

The Ukraine International Airlines jet crashed in flames about 10km from Tehran airport early on Wednesday morning, just hours after Iran fired ballistic missiles at bases used by US forces in neighbouring Iraq, in retaliation for the US assassination of top Iranian military commander Qassem Suleimani last week.

Canadian prime minister Justin Trudeau and British counterpart Boris Johnson have said intelligence information strongly suggests that an Iranian rocket hit the airliner; both leaders, and US president Donald Trump, have said the jet may have been targeted by mistake.

In the clearest statement yet from Washington, secretary of state Mike Pompeo said on Friday: “We do believe it is likely that that plane was shot down by an Iranian missile,” adding that he was “confident that we and the world will take appropriate action as a response.”

The Netherlands’ foreign minister Stef Blok also said a rocket strike was “indeed very likely” to have downed the airliner, and Nato secretary-general Jens Stoltenberg said “we have no reason not to believe the reports we have seen from different allied capitals”.

Ukraine struck a more cautious note, however, and its president Volodymyr Zelenskiy – who spoke to Mr Pompeo on Friday – said a missile strike was a possible but unconfirmed cause of the crash.

Kiev has sent a 45-strong team of security and air safety experts to Tehran, and Ukrainian foreign minister Vadym Prystaiko said they were receiving “full co-operation” from Iran and access to the wreckage and crash site.

“It’s not about politically whether we are leaning to one position or another, whether it’s the West against somebody else – we want to have the key pieces,” Mr Prystaiko said.

He insisted that conclusions could only be drawn when “we have collected everything and all the information which was shared [by allies], and we also have our own information – don’t forget we are the only nation that is on the ground with a very powerful team right now.”

Mr Prystaiko said Ukraine had received confidential information about the crash from the US and Britain, but needed to examine the victims’ bodies, the fuselage, seats and other parts of the plane to build up a full picture.

“What we really want is . . . forensic [evidence] on the ground; for example we haven’t even accessed the black boxes yet, which is a key point in our investigation.”

Iran says it plans to examine the flight recorders and seek foreign help if necessary, but Mr Prystaiko said: “We want them to be analysed in Kiev.”

As well as denying any role in bringing down the airliner, Iran also rejects claims that it has wrongly cleared debris from the crash site and questions video footage that seems to show the plane being blown out of the sky.

“Wait for technical expert examination of the situation and to see what is the reality,” Iran’s ambassador to Ireland Masoud Eslami told The Irish Times.

“Videos cannot be reliable evidence in such an important event.”

Ali Abedzadeh, the head of Iran’s civil aviation organisation, said in Tehran that it was “impossible that a missile hit the Ukrainian plane”.

Iranian government spokesman Ali Rabiei called the allegations “a big lie” that were part of US “psychological warfare” against his nation.