Despite his failings, at least Donald Trump was elected, unlike moralising actors

British comedian and actor Ricky Gervais returned to host the Golden Globe awards, cracking scathing jokes about Hollywood's elite that got both laughs and disapproving looks from the A-list audience. 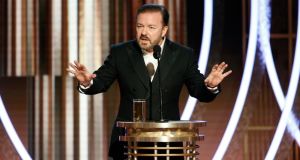 On Monday night comedian Ricky Gervais – divisive at the best of times – chastised a room packed to the brim of Hollywood’s mega elite. Hosting the Golden Globes award ceremony, he told them: “If you do win an award tonight, don’t use it as a platform to make a political speech. You’re in no position to lecture the public about anything, you know nothing about the real world.”

Gervais’s attack – levied at the growing trend for celebrities to embark on political lectures at award ceremonies – was met with a sea of po-faced and thin-lipped Hollywood stars, aghast that anyone might question their right to hold forth on any subject at any time.

Moments after Gervais made his views clear to the lecturers with no lecturing credentials to speak of, his point was proven. Actress Michelle Williams took to the stage – as if she spoke on behalf of all American women – to talk about abortion. Patricia Arquette approached the podium to address the state of the nation: “In the history books we will see a country on the brink of war. The United States of America, a president tweeting out a threat of 52 bombs including cultural sites. Young people risking their lives travelling across the world. People not knowing if bombs are going to drop on their kids’ heads and the continent of Australia on fire. . .”

It is easy to tolerate these kinds of political interventions from celebrities when we agree with what they are saying. The Hollywood elite are usually – if superficially – liberal, broadly centrist, moderate and pro-environment. But the problem isn’t the message, rather that the messengers haven’t earned the authority to tell the public what they should care about or who they should vote for.

Gervais was keen to emphasis A-lister hypocrisy. Referencing Apple’s pivot towards streaming with the new drama The Morning Show, he quipped that it was “a superb drama about the importance of dignity and doing the right thing, made by a company that runs sweatshops in China”.

It is true that Hollywood has a special penchant for hypocrisy. Kim Kardashian tweeted a heartfelt message about the realities of climate change, but flies everywhere in a private plane. Kylie Jenner, declaring her heartbreak at the ongoing bushfires in Australia, once chartered a jet for a make-up launch party. Writers, directors and actors claim moral high ground – as Gervais noted – while lining the pockets of companies with dubious moral practices.

But decrying the hypocrisy of stars – while easy to do – misses the mark. Hypocrisy is neither new nor the worst thing in the word. Rather we should be wary of celebrities who claim the role of moral arbiters, virtue signalling to those they could not be more different from, and in turn wary of those who endorse it.

That these stars possess staggering privilege, with most having very little in the way of regular life experience, is obvious enough. Most don’t know what it’s like to be dependent on the welfare state, and certainly haven’t had to worry about losing their livelihood via the closure of a steel plant in Virginia.

And the phenomenon, becoming increasingly commonplace, isn’t necessarily a new one – Frank Sinatra campaigned for Franklin Roosevelt in the 1940s. In the secular west, as religion is beginning to take a secondary role for a sizeable chunk of people it seems a vacuum has emerged. Where most people used to seek moral guidance from religious tomes or religious leaders, they now look elsewhere.

Celebrities have, then, kindly, stepped up to the mark – aware of their influence and more than happy to deploy it. But though they wield some kind of moral power, as a group they have no real moral legitimacy. The difference between the archbishop of Paris and Sean Penn is there isn’t a coherent moral foundation supporting whatever Penn’s latest pet project is. The difference between Donald Trump and Patricia Arquette is that Trump – despite his litany of character flaws and moral failings – was elected.

Celebrities are useful cultural signifiers when it comes to identifying trends, whether a film is worth seeing or an album worth listening to. Their role ends there. But as the lines get blurred the lessons they try to share with the world are granted authority they don’t deserve.

It is hard to escape the conclusion that celebrity intervention in our politics is either alienating – Gary Lineker and Patrick Stewart’s championing of Remain only entrenched the narrative that the Brexit fight was one of the elite metropoles versus the normal working people – or at least, illustrative of how out of touch they really are – for example, the glut of A-listers confidently endorsing Hillary Clinton for her to lose the election anyway.

Of course, it is no surprise that A-listers struggle to read the room in rural Ohio from their mansion nestled in the Hollywood hills. That’s okay because it’s not their job – there are plenty of people to do that quietly and without recognition.

But the narcissism endemic to celebrities who believe in a divinely ordained right to lecture the public – often as a status marker, proof they’re on the right side of history – is patronising and a lot more troubling than the hypocrisy that so often underlies it.