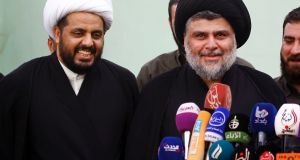 It was barely noticed internationally, but less than 24 hours after the United States’s assassination of Iranian military commander Qassem Suleimani, it also took the rare and provocative step of designating one of Iraq’s most lethal Shia militias a foreign terrorist organisation.

Asa’ib Ahl al-Haq, better known as AAH, was originally part of the so-called Mahdi Army led by cleric Muqtada al-Sadr, which posed the first significant Shia challenge to US forces in Iraq in 2004. It broke away two years later when Al-Sadr – not known for his moderation – agreed a ceasefire.

That hard line was to stand AAH and its founders, the Khazali brothers, Qais and Laith, in good stead in a region where “hard men” are revered and a taste for compromise is too often regarded as a sign of weakness – and, almost inevitably, of vulnerability.

Not alone was AAH taken up and sponsored by the Iranian government, but it began being trained by the elite Iranian Revolutionary Guard Corps (IRGF) Quds Force, responsible for clandestine operations outside Iran – and led from 1988 until his death last week by General Qassem Suleimani.

Backed by such formidable guerrilla expertise and resources, it specialised in what are known as EFP attacks, using armour-penetrating warheads in a more advanced version of the improvised roadside bombs used by Hizbullah against Israeli forces in South Lebanon in the 1990s.

According to the US state department, AAH has taken responsibility for more than 6,000 attacks against US and Iraqi security forces since 2006. The death toll is unspecified.

Under the grand title of The Khazali Network, it has also been responsible for arms trafficking, kidnappings, assassinations, and death squads used to ramp up vicious sectarian violence where the brothers and their allies deemed it strategically appropriate.

Its most infamous attack was on January 20th, 2007 when a team of 12 commandos – led by a blonde-haired man and driving black GMC Suburban vehicles of the type used by US government convoys – killed five US soldiers and wounded three more in an attack in Kerbala, southwest of Baghdad.

Both Khazali brothers were arrested two months later for their alleged role in the Kerbala attack when an SAS unit raided a house in Basra and trapped them along with a suspected Lebanese liaison, without casualties.

It is ironic then that AAH has been designated an FTO (foreign terrorist organisation) by President Donald Trump just as it has joined the political fold in Iraq, using a twin strategy of military strength and “social jihad” modelled on Hizbullah in Lebanon.

It took part in the 2018 parliamentary elections as part of the Fatah Alliance, accounting for 15 of its 48 seats, of which Qais Khazali holds one.

Those designations will make it more difficult for Washington to provide security aid to the Iraqi government, given AAH’s parliamentary standing, combined with the fact that it has actively supported the siege of the US embassy in Baghdad and calls to expel US troops from the country.

On the other hand, the Khazali brothers will be uncomfortably aware that they have, in effect, been officially targeted as terrorists by Trump – at a time when their single most powerful protector, Qassem Suleimani, is gone.