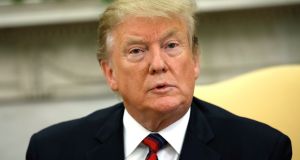 US president Donald Trump talks to reporters during his meeting with Slovak prime minister Peter Pellegrini in the Oval Office of the White House on Friday. Photograph: Yuri Gripas/EPA

US president Donald Trump spoke to his Russian counterpart Vladimir Putin by phone for more than an hour on Friday, discussing the outcome of the Mueller report among other topics, the White House said.

The two leaders discussed a wide range of issues, including North Korea, Venezuela and nuclear disarmament, Mr Trump said in a tweet.

“As I have always said, long before the Witch Hunt started, getting along with Russia, China, and everyone is a good thing, not a bad thing,” he wrote. “We discussed Trade, Venezuela, Ukraine, North Korea, Nuclear Arms Control and even the ‘Russian Hoax.’ Very productive talk!”

Mr Trump has routinely referred to the investigation by special counsel Robert Mueller into Russian interference in the 2016 presidential election as a “witch hunt”.

“It was discussed, essentially in the context that it’s over, and there was no collusion, which I’m pretty sure both leaders were very well aware of long before this call took place,” Ms Sanders said.

Speaking at an event in the White House with the visiting Slovak prime minister, Mr Trump described the phone call as a “very positive conversation”. He also appeared to contradict comments by secretary of state Mike Pompeo this week, who accused Russia of encouraging Venezuela’s president Nicolás Maduro to remain in Caracas.

While the state department has repeatedly blamed Russia for helping to shore up Mr Maduro’s leadership, and Russia has sent troops to the country, Mr Trump told reporters that the Russian leader “is not looking at all to get involved in Venezuela, other than he would like to see something positive happen”.

The United States has formally recognised opposition leader Juan Guaidó as interim president of Venezuela and has called for Mr Maduro to step down.

The White House immediately touted the figures as proof that its economic policy was working. “Jobs! Jobs! Jobs!” the president tweeted, alongside a link to a report on the job figures. The data added to expectations that the Federal Reserve would refrain from changing interest rates.

The US president has repeatedly called on the Fed to cut interest rates in recent months. Vice president Mike Pence also weighed in on the issue on Friday in an interview with CNBC. “I think it might be time for us to consider lowering interest rates,” he said.

But Fed chair Jay Powell indicated this week that an interest rate change is not on the cards this year.

The US president was forced to drop its nominee for the Federal Reserve board this week – the second time he has withdrawn a nominee for the prestigious role. Mr Trump announced on Thursday that conservative commentator Stephen Moore was withdrawing from consideration for the post.

Describing Mr Moore as a “great pro-growth economist and a truly fine person”, he said he had asked him to work with him “toward future economic growth in our country”. But there has been growing resistance from senior Republicans about Mr Moore’s candidacy due to comments he had made in the past about women.

Mr Moore’s withdrawal marks the second time in less than two weeks that Mr Trump has been forced to pull a candidate. Former presidential candidate Herman Cain withdrew from the process amid concerns about past sexual harassment allegations, which he denies.

Asked about the two open spots on the Fed’s board, Mr Pence said that the president was very interested in bringing fresh ideas to the Federal Reserve board, and is looking for nominees “who are as fiercely committed to the free market as he is”.