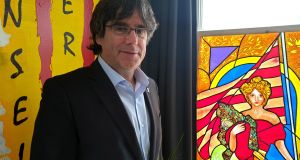 Carles Puigdemont: hopes to lead the pro-independence Together for Catalonia-Free for Europe (JxCat) electoral ticket in the May 26th ballot, even though he is in self-imposed exile in Belgium. Photograph: Clement Rossignol

Catalonia’s former president Carles Puigdemont has won a key legal battle in his bid to run as a candidate in the upcoming European elections, a move which he believes could lead to him gaining immunity from the Spanish legal system.

Mr Puigdemont hopes to lead the pro-independence Together for Catalonia-Free for Europe (JxCat) electoral ticket in the May 26th ballot, even though he is in self-imposed exile in Belgium.

On Monday, a Madrid court ruled that Mr Puigdemont was eligible to run as a candidate, as were his colleagues Antoni Comín, also in Belgium, and Clara Ponsatí, who is in Scotland. All three former members of the Catalan government fled Spain after staging a controversial independence referendum in October 2017.

Several of their former cabinet colleagues are among 12 defendants currently facing trial in Madrid for charges that include rebellion and disobedience.

“May those who believe they will defeat us by twisting the law give up hope,” the former Catalan president tweeted after the court’s decision, which had already been endorsed, albeit tentatively, by the supreme court.

The ruling responded to an appeal by the three politicians after the national electoral board barred them from running in the election on the grounds that they are not registered in the appropriate section of the electoral census.

According to European Parliament rules, MEPs are immune from prosecution across the EU. The Catalan government believes this means that, if elected, Mr Puigdemont and his exiled colleagues would immediately gain immunity and could return to Spain without facing legal repercussions. Mr Puigdemont has said he would return if given the necessary legal guarantees.

However, a report drawn up last month by the European Parliament’s legal department on this particular case states that an MEP’s immunity does not come into effect until the new legislature begins, on July 2nd. Before that, Mr Puigdemont would have to return to Madrid to take a pledge of office.

While Mr Puigdemont and others in the Catalan independence movement were celebrating Monday’s ruling to allow his candidacy, unionist parties on the political right expressed their disappointment.

Pablo Casado, leader of the Popular Party (PP), said the three Catalan politicians “want to represent our country in European elections so that they can keep creating propaganda paid for by our taxes and try to convey the post-truth falsehood that in Spain there is no democracy and that political freedoms are not respected”.

The PP is appealing against the decision to allow the candidacies before the constitutional court, which is expected to rule on the matter this week.

Meanwhile, the Catalan government has agreed not to give an award to the region’s former parliamentary speaker, Núria de Gispert, after she posted a tweet which appeared to compare certain unionist politicians with pigs. Ms de Gispert had been due to receive the prestigious St George’s Cross but she turned it down after the controversy flared up.