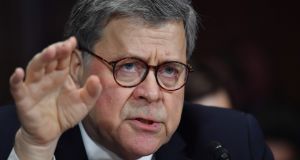 US attorney general William Barr: a strong advocate for the concept of presidential power, he has resisted calls to provide extra documentation to Congress. Photograph: Nicholas Kamm

House Democrats have commenced contempt proceedings against attorney general William Barr after he missed a deadline to furnish a congressional committee with a complete copy of the Mueller report.

The House Judiciary Committee had issued a subpoena to Mr Barr, demanding an unredacted version of special counsel Robert Mueller’s report into Russian electoral interference by 9am on Monday.

But the justice department missed that deadline, prompting the committee to announce the contempt proceedings. The committee will vote on whether Mr Barr should be held in contempt of court on Wednesday.

He continued: “Congress must see the full report and underlying evidence to determine how to best move forward with oversight, legislation, and other constitutional responsibilities. The attorney general’s failure to comply with our subpoena, after extensive accommodation efforts, leaves us no choice but to initiate contempt proceedings.”

Mr Barr released a redacted version of the Mueller report on April 18th, having initially published a four-page summary of its findings in March. But Democrats have argued that Congress has the right to see the full report and the underlying evidence accompanying it. Tensions over the findings of the Mueller report have deepened after a letter emerged last week showing Mr Mueller’s dissatisfaction with Mr Barr’s summary of the report’s findings.

House Democrats are also pushing for Mr Mueller to appear before Congress. While a tentative date of May 15th had been set, according to one committee member, nothing has yet been confirmed.

If the House votes to hold Mr Barr in contempt of Congress, the issue is likely to end up in the courts where a judge would decide whether the Trump administration must hand over documents to Congress.

Mr Barr, a strong advocate for the concept of presidential power, has resisted calls to provide extra documentation to Congress, while Democrats in Congress argue that they have a constitutional responsibility to oversee the executive branch.

Pressure has been building on Mr Trump since the publication of the Mueller report last month. On Monday, more than 370 former federal prosecutors signed a statement asserting that Mr Mueller’s findings would have led to obstruction of justice charges against Mr Trump if he wasn’t president.

Mr Trump, who was due to present the presidential medal of honour to golfer Tiger Woods at a ceremony in the White House on Monday evening, tweeted about the Mueller report on Monday.

“There are ‘No High Crimes & Misdemeanors,’ No Collusion, No Conspiracy, No Obstruction. ALL THE CRIMES ARE ON THE OTHER SIDE, and that’s what the Dems should be looking at, but they won’t,” he said in a tweet, adding: “Nevertheless, the tables are turning!”

In comments to the media as he left his home to drive to the federal prison in Otisville, New York, Mr Cohen said: “I hope that when I rejoin my family and friends, that the country will be in a place without xenophobia, injustice and lies at the helm of our country. There still remains much to be told, and I look forward to the day that I can share the truth.”

Among Mr Cohen’s crimes are payments he made to two women on behalf of Mr Trump in the weeks preceding the 2016 presidential election, which he subsequently lied about to Congress.