Trump threatens to hike tariffs on China to 25% 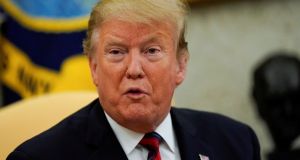 US president Donald Trump has threatened in a series of tweets to raise tariffs on all Chinese imports to 25 per cent. Photograph: Jonathan Ernst

US president Donald Trump has threatened to raise tariffs on all Chinese imports to 25 per cent, sharply ratcheting up pressure on Beijing to make concessions in a make-or-break round of trade negotiations set for this week.

In a pair of tweets on Sunday, Mr Trump said that levies imposed on Chinese goods over the past year as part of the trade war with Beijing were “partially responsible for our great economic results” and had “little impact on product cost”.

“The Trade deal with China continues, but too slowly, as they attempt to renegotiate. No!,” Mr Trump wrote.

The aggressive tweets from Mr Trump mark a big shift in rhetoric from the US president on the trade negotiations with China, compared with consistently upbeat remarks about the state of the talks in recent weeks.

This week, Liu He, China’s vice-premier, is set to arrive in Washington for a crucial round of negotiations with Robert Lighthizer, the US trade representative, and Steven Mnuchin, the US treasury secretary. People familiar with the talks have said the goal of this session is to finalise an agreement, setting the stage for a “signing” summit between Mr Trump and Xi Jinping, the Chinese president, possibly in the middle of June.

However, finding a solution has proved trickier than expected. Both US and Chinese officials have repeatedly delayed the timing of a deal in order to try to get better terms. Originally, Mr Trump had hoped to have the negotiations wrapped up by March.

Among the biggest sticking points in the talks is the fate of existing US tariffs on Chinese goods, which Beijing would like to see completely erased but Washington would like to retain in part so that it can keep pressure on China to comply with the deal.

But negotiators have also been haggling on the extent of Chinese concessions on structural economic reforms, with the US side grappling with the reality that Beijing will only go so far in reining-in industrial subsidies, intellectual property theft, and its barriers to market access for a variety of industries. It is also unclear how far China will go in committing to large-scale purchases of US goods. – Copyright The Financial Times Limited 2019

7 Ireland is 13th most expensive place to live, survey shows