White House and Republican governors clash over easing of restrictions 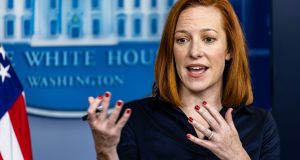 White House press secretary Jen Psaki: “What our focus is on, and what the president’s focus is on when he came into office... was ensuring that we had enough vaccines.” Photograph: Samuel Corum

Tensions between US president Joe Biden and Republican governors continued on Thursday, after several states moved to lift their Covid mask mandates in defiance of federal guidelines.

Texas and Mississippi eased Covid restrictions in their states this week amid an increase in vaccinations and stabilising infection numbers, prompting criticism from Mr Biden who declared: “The last thing we need is Neanderthal thinking.”

Speaking at the White House briefing on Thursday, press secretary Jen Psaki defended the president’s choice of words, saying they were a “reflection of his frustration and exasperation, which I think many American people have, that for almost a year now people across the country have sacrificed. At many times they haven’t had information they need from the federal government.”

It follows criticisms from some conservatives about the president’s language.  Mississippi’s governor Tate Reeves, who announced measures to lift Covid restrictions in his state this week, said the people of Mississippi “can assess their choices and listen to experts”, as case numbers drop.

“I guess I just think we should trust Americans, not insult them,” he said, referring to the president’s remarks. Later he said that Mr Biden is someone “who needs to get outside of Washington DC and actually travel to middle America”.

Health experts have warned Americans not to lower their guard, as the pace of vaccinations picks up across the country. The United States is now administering about two million vaccines a day, boosted in part by the authorisation of the Johnson & Johnson one-shot vaccine last weekend – the third Covid vaccine to be approved.

The director of the Centre for Disease Control and Prevention (CDC), Rochelle Walensky, warned Americans this week not to relax social distancing, mask-wearing and other precautions. “We stand to completely lose the hard-earned ground we have gained . . . now is not the time to relax the critical safeguards that we know can stop the spread of Covid-19 in our communities,” she said.

During the briefing, Ms Psaki also dismissed suggestions that the Biden administration was not giving enough credit to former president Donald Trump for work done in advance of the vaccination rollout.

“I don’t think anyone deserves credit when half a million people in the country have died of this pandemic,” she said. “What our focus is on, and what the president’s focus is on when he came into office just over a month ago, was ensuring that we had enough vaccines – we are going to have them now.”

Negotiations are continuing on Capitol Hill about securing political support for Mr Biden’s $1.9 trillion Covid stimulus plan. The Senate voted to take up the Bill on Thursday with vice-president Kamala Harris casting a tie-breaking vote in the evenly split chamber. Debate on the Bill was expected to start later on Thursday, with Republicans vehemently opposed to the scope of the economic package.

Democrats are expected to push through the Bill using the budget reconciliation process, an archaic but important procedural measure that allows some legislation to pass with just a simple majority. If all 50 Democrats vote in favour, together with Ms Harris, the Bill will pass.

But Senate rules mean that some elements of the Bill – such as a $15 minimum wage – cannot be included in the budget reconciliation process.

While the Senate met on Thursday, the House of Representatives cancelled its session following warnings of a possible threat to the building from some adherents of the QAnon conspiracy theory.

Capitol police have requested that national guard troops remain near the Capitol building for a further two months. The department of defence is considering the request. The deployment of extra troops, to guard the complex following the January 6th riots, was scheduled to end on March 12th.