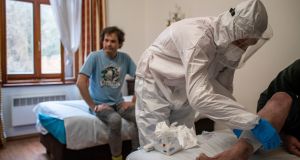 Hungary is shutting primary schools and most shops to tame a “very strong” third wave of the coronavirus pandemic, which has forced the Czech Republic and Slovakia to ask other EU states to accept patients from their struggling hospitals.

Gergely Gulyas, chief-of-staff to Hungarian prime minister Viktor Orban, announced that all shops except food stores, pharmacies and petrol stations would close from March 8th to March 22nd, and nurseries and primary schools would shut their doors until April 7th.

“The third wave is very strong, stronger than the second wave,” Mr Gulyas said on Thursday, when Hungary reported 6,278 new cases of Covid-19, its highest daily rise in three months.

“If we don’t close now then not only will the number of infections and deaths radically increase, but it will delay our opening [of the economy],” he added.

“We hope we are in the last phase of the pandemic, and we will reach vaccination levels within a few weeks or months that allow a reopening, which will start from March 22nd in a gradual manner.”

The Czech Republic and Slovakia, which have recorded some of the world’s worst per capita infection and deaths rates from Covid-19 recently, tightened controls this week and sought foreign help to cope with a surge in patients.

Prague officials said that Germany and Switzerland had agreed to take Czech patients, and Poland was expected to do the same; the government in Bratislava announced on Thursday that it had already sent patients to Poland, and a team of Romanian medics is now working in Slovakia to ease strain on their local colleagues.

The Czech and Slovak governments announced that they each expect to receive an additional 100,000 doses of the Pfizer/BioNTech vaccine under an EU “SOS” scheme amid criticism of the bloc’s vaccine rollout and heated debate over Russian and Chinese vaccines that are not approved by the European Medicines Agency (EMA).

The EMA, the EU’s drugs regulator, said on Thursday it was starting a review process for Russia’s Sputnik V vaccine that could lead to it receiving clearance.

Hungary is already using Sputnik V and China’s Sinopharm vaccine, however, and Slovakia’s government was thrown into crisis this week by a row over prime minister Igor Matovic’s decision to buy the Russian vaccine without waiting for a green light from the EMA. Czech president Milos Zeman, meanwhile, says he has asked his counterparts in Moscow and Beijing to provide their vaccines to his country.

Poland’s health minister Adam Niedzielski reported 15,250 new Covid-19 cases on Thursday, one of the country’s biggest one-day rises since November, and said coronavirus restrictions would not be eased significantly until after Easter.

That news came as drug-maker AstraZeneca postponed a planned delivery of 62,000 vaccine doses to Poland, which Michal Kuczmierowski of the governmental strategic reserves agency called “an absolutely scandalous situation”.

“AstraZeneca informed us at the last minute...Such practices are demolishing the vaccination schedule in the country,” he said.

Polish president Andrzej Duda talked this week to Chinese leader Xi Jinping about potentially buying vaccines from Beijing, but no agreement was announced.