Five weeks after Germany said the AstraZeneca vaccine was not for over-65s, 84% of the vaccine delivered is unused in freezers 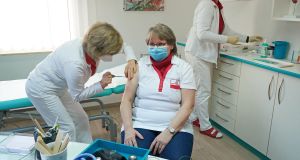 A doctor vaccinating a healthcare worker at her private practice in the state of Brandenburg, Germany. Photograph: EPA/Sean Gallup

Larger private gatherings will be possible from next week, and a staggered reopening of shops, cultural and sport facilities will follow by month-end if infection rates remain stable and rapid testing is rolled out.

However, Wednesday’s roadmap for the weeks ahead is a document of doubt, a long way from how Germany sailed through the first pandemic wave thanks to rapid widespread testing.

All over the world people were impressed but not surprised about that initial response, largely because it met their expectations of “German efficiency”. So how, then, has Germany fallen behind Morocco in the vaccination league table?

The answer, as German residents or regular readers of these pages will know, lies in the reality of German inefficiency.

You can see German inefficiency in the big things – staggering delays and cost overruns on airports and concert halls – but also in the little things: supermarkets’ daily struggle to match the ebbs and flows of customer queues with open cash registers.

How many Germans does it take to vaccinate someone against Covid-19?

16: one to administer the jab, another to discuss medical concerns, a third to raise ethical implications, a fourth to flag data protection issues, a fifth to send Berlin regular updates by fax and 11 others to stand around voicing non-specific concerns.

Worrywarts are not uniquely German, but the local brand – dubbed “Bedenkenträger” or concern-carriers – can have a uniquely obstructive “can’t do” attitude that turns even simple Covid-19 decisions into an ordeal.

Post-war federal structures in Germany mean at least three levels of administration – federal, state and local – are involved in health matters, in this case for distributing, storing and administering vaccines. The last weeks have been characterised less by co-operation than finger-pointing and pass-the-blame-parcel.

Another cultural trait evident in the glacial vaccination programme is an inability to pivot away from a plan that is not working, or when circumstances change.

For instance, while other countries vaccinate as many people as they can, arguing that 90 per cent protection is better than none, Germany is holding back millions of vaccines for second doses.

That is not all. Five weeks after German health authorities said the AstraZeneca vaccine was not recommended for over-65s, some 84 per cent of that vaccine delivered to date is sitting unclaimed in refrigerators.

This prompted state leaders in Bavaria and Saxony to demand a rapid rewrite of the vaccination plan: give us the unclaimed doses for our citizens living on borders with Czech and Austrian mutation hotspots. But federal health minister Jens Spahn has other ideas, with new data suggesting the AstraZeneca vaccine may be suitable for over-65s after all.

As politicians discuss the matter, the vaccine stockpile continues to grow, compounding frustrations over failed procurement of masks and rapid tests.

A final inefficiency is Germany’s largely analogue health system. While other countries have patient chip cards and online platforms, a benefit in pandemic planning, Germany has spent a decade debating the rights and wrongs of digital health databases. The result: millions of elderly Germans have been asked to secure their own vaccination appointment – on overloaded telephone hotlines and websites.

Last week the Bild tabloid, expressing anger at the many setbacks, announced on its front page – in English – that Germans were jealous of the UK, prompting a delighted reply in German from the Sun.

Of course neither tabloid mentioned how, even with the UK’s current lead, no vaccination can bring back the UK’s 123,000 Covid-19 dead. Germany has a fifth more people than the UK yet just over half its coronavirus deaths. But the priority for German politicians now: every day of delay costs lives – and votes.

They can still turn this around but, given six of its seven main political parties are in power somewhere in the country, all share responsibility.

And in this election year it’s possible the only party not in power anywhere is the one most likely to gain from German vaccination inefficiency: the far-right Alternative für Deutschland (AfD).