What if the Monica Lewinsky scandal had happened in the #MeToo era?

America Letter: Fox News hammers Bill Clinton in ‘Scandalous’. But he might deserve it 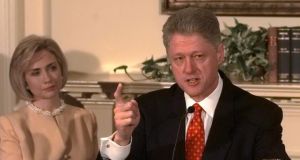 For US politics junkies the current climate in Washington is irresistibly compelling. Rolling coverage of Donald Trump dominates cable news channels, as viewers tune into the latest twists and turns of his presidency.

But for those looking for something a little different there is always Fox News. The station, which remains the most-watched cable news channel in the United States, and is Trump’s station of choice, is offering a throwback to the political climate of the 1990s. A seven-part Sunday-night documentary that premiered on January 21st revisits the Bill Clinton presidency.

Scandalous aims to explore the controversies of his time in office, which ultimately led to his impeachment over the Monica Lewinsky scandal, 20 years ago this year, and his trial before the Senate (which acquitted him).

Unsurprisingly, the Fox series does not hold back in its condemnation of the Clintons. From the outset we are reminded of the seriousness of the administration’s alleged crimes and failings, told in booming tones that the Clinton presidency represented one of the “greatest scandals in American history”.

So far Scandalous has explored the Whitewater property probe, the suicide of Clinton’s close friend and White House lawyer Vince Foster, the appointment of the special investigator Robert Fiske and his replacement by Ken Starr, and the Paula Jones scandal – and we’re only on episode two.

Although the series does offer a gentle reminder that political scandals existed before Trump, the timing and message of Scandalous are significant. Fox News, which is highly supportive of Trump, is airing the documentary at a time when the president is himself facing calls for impeachment and his administration is under investigation by a special counsel.

The series dovetails well with the editorial focus of Fox News and other conservative media outlets, which in recent weeks have been aggressively focusing on alleged anti-Trump bias within the FBI and arguing that the real scandal involves Hillary Clinton.

But while Scandalous may be a perfect example of the Trumpian art of political deflection, as the Mueller investigation moves ever closer to the White House, it does raise important questions about the Clinton legacy, particularly in the #MeToo era.

As the 20th anniversary of the Lewinsky scandal approaches, many commentators, and Democrats, have reflected on the year when Bill Clinton

The Lewinsky scandal had been buried in the annals of recent political history as a partisan effort to bring down a Democratic president, but times have changed. Certainly, it is arguable that Bill Clinton would not have survived now. The most powerful man in the world engaging in inappropriate sexual activity with a 22-year-old intern looks more disturbing through the lens of #MeToo.

The New York senator Kirsten Gillibrand, a close ally of the Clintons and a possible 2020 presidential candidate, was among those who said that Bill Clinton should have stepped down. “It would have been a very different conversation” if the controversy had taken place in 2017, she said in the wake of Harvey Weinstein scandal.

Lewinsky, who is now 44, has spoken of the episode as a nightmare. Writing in the New York Times last year, she recalled how her character and looks were picked apart by the conservative media and how she was threatened with 27 years in jail, having been accused of signing a false affidavit. After the Weinstein scandal broke she tweeted one short line: “#MeToo”.

The episode is also uncomfortable for Hillary Clinton, the symbol of hope for so many women as she came tantalisingly close to becoming the first woman president of the United States. That the would-be president stood by her husband, often attacking his accusers rather than the repeatedly unfaithful and arguably predatory man she had married, was something that surfaced on the edges of her presidential campaign but would, arguably, be more politically toxic in the current climate.

Last week it emerged that Hillary Clinton chose to demote rather than fire an aide on her 2008 campaign who was accused of repeatedly sexually harassing a younger woman subordinate – another unsettling report for her millions of supporters.

As the United States goes through a period of reckoning over sexual harassment and assault in the workplace, the behaviour of Bill Clinton, and his wife’s handling of the scandal, look even more disquieting two decades later.