When old-fashioned American optimism shines through the gloom

America Letter: The ritual of Sunday brunch brings with it the feel-good schmaltz of the New York Times vows section 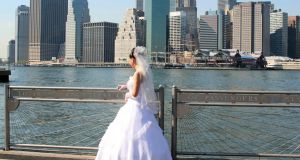 Stories of love: hearing about the lives of ordinary New Yorkers makes for a welcome bright spot during difficult political times. Photograph: Istock

One of the pleasures of Washington life is the ritual of Sunday brunch. As in New York, this late morning meal is something of an institution in the US capital. So much so that it is impossible to get a table if you haven’t reserved weeks in advance. “Table for two? That will be an hour and 30 wait,” is a common refrain from the implacable hostesses that guard DC’s restaurants as chattering 30-somethings sit inside sipping mimosas and eating eggs Florentine.

As a result, I often find myself at a local diner around the corner. Quieter, less flash, it is a popular spot with an older, gay clientele, but it welcomes all sorts and serves the best brunch in the city. Here over brunch and copious supplies of coffee I turn to another Sunday ritual – the New York Times Sunday edition.

Every week it arrives with a thud outside my front door. With 10 separate sections and close to 100 pages, it weighs as much as a brick, its multiple sections encased in a neat plastic roll.

As the coffee arrives and the din of the chatter around me seems to subside I retreat into the world of the newspaper.

Diligently I scan the first page, eager to keep informed of any developments in the Trump presidency. As I move further through the paper, important stories are laid out before me, demanding to be read – Afghan forces’ latest struggles with the Taliban insurgency or the plight of citizens in the Philippines in the face of climate change.

But inexorably, I’m driven elsewhere – to the style section.

Here, hidden away in the back pages of Sunday Styles, is the real gem of the New York Times’s Sunday edition – the “Vows” section.

Over two to three pages each week Americans open up their lives to New York Times writers and readers as they share their stories of love, courtship and marriage – or in the paper’s words: “How couples got from dating to ‘I Do’.”

There is none of the two-sentence terse declamations that characterise engagement notices in European newspapers. Instead, each feature is a well-crafted vignette.

Take the latest edition. It features Fred Nelson III (58), Aretha Franklin’s musical conductor, who married mother-of-two Lynda Cartwright (51) at a Baptist Church on Christmas Eve. “They met, fittingly, over a piano in 2015,” we are told as their developing courtship is described.

One profile talks at length about the business interests of the bride’s father and the books her mother has written – never look a PR opportunity in the mouth perhaps?

The next page profiles Kate Aufses, a lawyer, and Justin Oldfield, a physician, both 31, who were married by Rabbi Ari S Lorge in New York on January 13th and whose CVs and list of educational achievements would be the envy of any proud parent.

And then there is Jill Furman (49) and Andrew Blauner (53) who met at a film premiere in 2015 and tied the knot in January. “Tonight I had the second date with the man I’m going to marry,” the bride wrote on a post-it note after the second date.

It would make the most hardened heart melt.

But while the New York Times vows section does not hold back from effusive displays of emotion, the articles can also adopt tactful understatement when needed. The terse sentence: “The bride’s first marriage ended in divorce. As did the groom’s,” makes a regular appearance in the columns – capturing a multitude in so few words.

Other idiosyncrasies are the insistence on describing the biographical details and job descriptions of the bride’s and groom’s parents – no matter the ages of the happy couple. One profile talks at length about the business interests of the bride’s father and the books her mother has written – never look a PR opportunity in the mouth perhaps?

But for all its shameless self-promotion and feel-good schmaltz, the New York Times vows section is a welcome bright spot in what can feel like a lost and dejected America in these difficult political times.

By opening a window into the world of ordinary New Yorkers, whatever their age, sexuality or religious orientation, the profiles are a testimony to the good old-fashioned American attitude of optimism, openness and tolerance that continues to shine through the gloom of the Trump presidency. As I look out at the blue skies of Washington and finish my coffee I can’t help thinking that America has better days ahead.