‘The Post’, set in Nixon era, resonates in Trump’s US 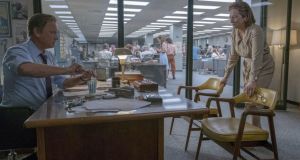 The United States is the home of the movie theatre, and no more so than in the nation’s capital.

Peppered throughout Washington DC are small, independent cinemas, some of which have existed for more than a century. The Miracle Cinema near Capitol Hill opened its doors in 1909. Today you can buy a ticket for less than $10, sink into its comfy leather seats and forget about the outside world as the red velvet curtain rolls back.

Elsewhere around the city, independent cinemas proliferate. The Avalon Theatre, which opened in 1923 to showcase the silent films of the time, closed in 2001. But after a fundraising drive by the local community the cinema reopened two years later, evidence of the continuing importance of film to the cultural identity of America.

Oscars season is always a busy time for cinema-goers. The combination of must-see Academy Award contenders, and the time of year – who doesn’t want to escape the January weather and curl up in front of a good movie? – means cinemas do a brisk trade.

So it was with a spring in my step that I went to see The Post, the Oscar-nominated film starring Meryl Streep and Tom Hanks. Unfortunately, everyone in DC seemed to have the same idea. Screenings of the film, which went on early release in the capital, were booked out for days.

Finally on a quiet midweek evening I took the metro to Cleveland Park to see the film at the Uptown Theatre, a beautiful art deco building opened by Warner Brothers in the 1930s.

The Post – the shorthand still used by everyone in this city to describe the Washington Post – tells the story of the newspaper’s decision to publish the Pentagon Papers in 1971. The classified documents showed how successive US administrations had known that the Vietnam war was unwinnable but continued sending troops.

Hanks plays Ben Bradlee, the editor who later oversaw the paper’s uncovering of the Watergate scandal, while Streep stars as Katherine Graham, the Post’s owner who reluctantly became the first female publisher of a US national newspaper when her husband died unexpectedly.

The challenge of putting aside personal connections “to serve the governed not the governors”, as the film puts it, is a central theme of The Post

Never has the timing of a film been so appropriate. In its depiction of the relationship between the media and the White House and the role of newspapers in democracy, parallels with Donald Trump presidency are everywhere.

In this era of fake news accusations, The Post contains many feel-good soundbites to lift the hearts of many a Trump detractor in the US. “The only way to protect the right to publish is to publish,” declares Hanks solemnly. “If we live in a world where the government can tell us what we can and cannot print, then the Washington Post has already ceased to exist.”

You can almost hear Hanks saying soothingly to despairing Democrats of today that everything will work out in the end. During my screening in Cleveland Park the audience burst into spontaneous applause at several points.

But the film also offers a more nuanced reflection on the relationship between the government and media. Bradlee’s relationship with John F Kennedy is explored, as is Graham’s friendship with defence secretary Robert McNamara. The challenge of putting aside personal connections “to serve the governed not the governors”, as the film puts it, is a central theme of The Post.

The film also examines the balance of power within the federal government itself.

As the Nixon administration tries to ferret out the leaker within the system who divulged the classified documents, there are accusations of “treason”. Flash forward almost half a century and it could be Trump talking about the FBI and its director James Comey, the man he fired after he demanded unwavering loyalty according to Comey’s Senate testimony last year. The heroes of The Post are not just the crusading media but also Daniel Ellsberg, the whistleblower who leaked the information in the first place.

The film may be tinged with nostalgia in its gritty depiction of the printing presses and its evocation of the golden age of investigative journalism during the Nixon era, but in many ways things are not that different today. The newsroom as depicted in The Post still looks like any newsroom of today (minus the cigarette smoke), newspapers are still being printed, and first-class publications are still breaking news stories that infuriate the president.

Whether Washington’s most famous cinema – the small movie theatre in the East Wing of the White House – will be screening The Post for the first family is not clear. What is certain, however, is that top-quality newspapers, whether in print or digitally, will continue to exist long after Trump leaves office.