A stone’s throw from the World Bank and IMF, people live in tents and makeshift shacks 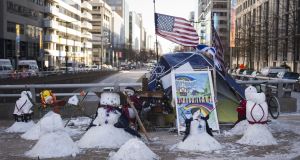 As a carpet of snow and severe storms descended on parts of the US this past week, the new year got off to a slow start for many.

In the nation’s capital many schools were closed, while tourists skated across Washington’s famous Reflecting Pool in front of the Lincoln Memorial, much to the exasperation of local officials.

One strand of Washington’s community was particularly affected by the inclement weather: the homeless.

Nowhere is the gap between the haves and the have-nots of American society more apparent than in the nation’s capital. A report for the United States Conference of Mayors just over a year ago found that, of 32 cities surveyed, Washington had the highest rate of homelessness. There are 124 homeless people for every 10,000 in the city – twice the national average.

A stone’s throw away from global institutions such as the World Bank and the IMF – and far removed from the wealthy northern and western suburbs that circle DC – people live in tents and makeshift shacks. Many more have been priced out of the market as rents soar in one of the US’s most expensive cities.

N Street Village, located just a 20-minute walk from the White House, is one of the many institutions that cares for the city’s homeless.

Like many of the homeless shelters and soup kitchens around the city, it has strong roots in the church. Pastor John Steinbruck and his wife, Erna, founded the centre in the early 1970s. Today Starbucks stores and yoga studios are nearby, but at that time the area was rife with crime, drugs and prostitution.

When homeless people literally began banging at the church door, Pastor John opened the church sanctuary to those in need. When a woman died on the steps of the church, he knew that a dedicated space was needed. In co-operation with other church and social groups, the N Street Village was born.

Today, across from the Lutheran church, stands N Street Village’s flagship site – the organisation operates five centres in total in DC, all for single women. These include Miriam House, which houses women with HIV; and the Patricia Handy Place for Women, the largest centre, which has 213 beds.

Residents range from those who need temporary day refuge to those who have more long-term needs.

On this cold weekday morning, it is busy in the women’s day centre. Women who arrive here each day are given two hot meals and a snack, an opportunity to shower or to wash their clothes. The only request is that they commit to five positive “activities” a week, and partake in one light chore.

While the stories of those who come through these doors are very different, there are some common threads

Doctors are available at the centre twice a week, while group classes in arts and crafts take place throughout the day. About 40 per cent of funding comes from private funds, about 50 per cent from government funding and the remaining 10 per cent from rent from an affordable housing scheme attached to the agency.

Kenyatta T Brunson, director of programmes at the agency, says the policy of N Street Village is to meet the women who come here on their own terms.

“We like to say around here that ‘she can be me’. Any woman walking through that door could be me. We have women who have worked their entire lives and unfortunately situations such as loss of home, loss of job, disability has rendered them homeless. Then we have women who are chronically homeless due to substance abuse or mental health issues. We serve the entire continuum of women.”

But while the stories of those who come through these doors are very different, there are some common threads. More than 80 per cent of women who use the N Street Village facilities are African-American – in part a reflection of the historically high number of black people in the city, in part a reflection of the social inequality along racial lines that continues to be a feature of American society.

One long-term resident of the centre, Lolita, tells me that she first came to the centre six years ago as an addict. She is now clean of drugs and works at a local supermarket. She pays a small rent for her accommodation. “I have rebuilt my life; found the real me,” she says as she heads off for her day job.

For Kenyatta Brunson, if the agency helps even one woman, their work is worth it.

“All of us are able to touch the women that come through our doors every single day,” she says with a smile. “To see them grow in their journey is just an amazing place to be.”