Girl sentenced to 40 years in hospital over Slender Man stabbing 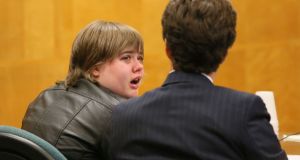 A Wisconsin teenager was sentenced on Thursday to 40 years in a psychiatric hospital for trying to kill a friend to gain the favour of Slender Man, a fictional internet character. The girl, Morgan Geyser (15) pleaded guilty last year to attempted first-degree intentional homicide as part of a deal in which prosecutors agreed not to seek prison time.

Her lawyers and doctors said that when she and another friend, Anissa Weier, who were both 12 at the time, committed the crime, Geyser was delusional as a result of schizophrenia and psychotic spectrum disorder. Weier pleaded guilty to a lesser charge – being a party to attempted second-degree intentional homicide – and was sentenced in December to 25 years in a psychiatric hospital.

Geyser’s lawyers had argued for a shorter commitment in a less restrictive facility, saying she no longer showed symptoms of psychosis. Two doctors called by the defence testified to that effect. But another doctor testified for the prosecution that Geyser still posed a danger to the public, and that she had described hearing voices as recently as September.

In handing down the sentence, Judge Michael O Bohren, of Waukesha County Circuit Court, said he considered a 40-year commitment “reasonable and fair taking into account the unique circumstances of this case.” Geyser’s lawyers can petition for her release every six months.

After their arrest, Geyser and Weier said they had stabbed Payton Leutner because they wanted to please Slender Man, a fictional character generally depicted as a tall, shadowy figure with a blank face. They said they believed that Slender Man was real and lived in a mansion in the woods in northern Wisconsin, and that by killing Ms Leutner, they would become his “proxies”.

On Thursday, Geyser spoke briefly at her sentencing hearing and began crying as she apologised to Ms Leutner, referring to her by a nickname. “I just want to let Bella and her family know I’m sorry,” she said. “I never meant this to happen. And I hope that she’s doing well.”

The crime happened more than three years ago, when Geyser, Weier and Ms Leutner were sixth-graders at Horning Middle School in Waukesha. In May 2014, Geyser and Weier lured Ms Leutner into the woods, where Geyser stabbed her 19 times with a kitchen knife as Weier urged her on.

“Anissa told her to lie down so she wouldn’t lose blood so quickly, and told her to be quiet,” Geyser told Mr Bohren. “And we left.” Ms Leutner managed to crawl out of the woods and find an adult. Over the course of several months, she recovered from her injuries and was able to return to school. But doctors said one of the stab wounds had come within a millimetre of an artery whose breach would have killed her.

“If the knife had gone the width of a human hair further, she wouldn’t have lived,” Dr John Kelemen, a thoracic and cardiac surgeon who operated on her, told ABC News at the time. In a letter to the judge read in court in December at Weier’s sentencing, Ms Leutner’s mother said her daughter would “struggle with the events of that day and physical and emotional scars it left for the rest of her life”.

Anthony D Cotton, a lawyer for Geyser, said in a phone interview on Thursday that the sentence was expected. Under Wisconsin law, he noted, commitments to psychiatric facilities can be terminated early if the patient is compliant, so it can make sense for a judge to “impose a larger number and evaluate as time goes on”.

Mr Cotton said Geyser’s lawyers intended to petition for her release regularly, “as long as Morgan continues to do well”. He said the team had not yet decided whether to appeal the sentence.

“As long as she takes her medication and follows her orders, she’s certainly well enough to be in a less restrictive setting than inpatient commitment,” he said. “There are services available in a more therapeutic, less restrictive environment that she should be able to take advantage of.” – New York Times

1 Midlands lockdown: ‘Why shut down Offaly and leave Dublin open?’
2 Restrictions on Kildare, Laois and Offaly could be extended to other counties, NPHET warns
3 Sand-hued cyclepaths changing the face of south Dublin coast
4 Meat plant clusters may be down to softly-softly approach
5 Inside the dog-trafficking trade: ‘After drugs, it’s guns, then pups’
Real news has value SUBSCRIBE