President Donald Trump said the contents of a controversial Republican memo tell a disgraceful story and that "a lot of people should be ashamed." Video: Reuters 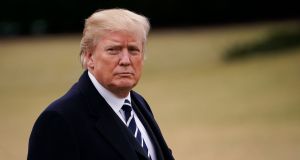 US president Donald Trump has authorised the release of a controversial memo which documents alleged failings in the FBI’s approach to the surveillance of a former Trump associate.

The four-page memo, written by Republican aides, was declassified without redactions.

Confirming that the document had been declassified, Mr Trump said in the White House it was a “disgrace what’s going on in this country”. “A lot of people should be ashamed of themselves,” he said.

The memo claims that the FBI in seeking approval by a judge to extend surveillance of former Trump associate Carter Page, did not disclose that the information used to justify the surveillance was based in part on a discredited dossier compiled by consultancy Fusion GPS – research that was financed by Democrats.

Among those who signed the original warrant, and the three renewal warrants, the memo states, were then FBI director James Comey, former deputy FBI director Andrew McCabe who resigned earlier this week, former acting attorney general Sally Yates who was fired by Mr Trump in January 2016 and the current deputy attorney general Rod Rosenstein.

The top Leadership and Investigators of the FBI and the Justice Department have politicized the sacred investigative process in favor of Democrats and against Republicans - something which would have been unthinkable just a short time ago. Rank & File are great people!

The release of the memo occurred after Mr Trump agreed to declassify the information. In a statement signed by White House counsel Donald McGahn accompanying the memo, the administration’s top lawyer notes that while disclosing information of this sort is “extremely rare”, declassification is permitted “when the public interest in disclosure outweighs any need to protect the information”.

But while Republicans have defended the decision to release the memo as purely an effort to protect civil liberties, Mr Trump’s critics view the move as the latest effort by the president to discredit the FBI and the Russia investigation.

“Top Leadership and Investigators of the FBI and the Justice Department have politicized the sacred investigative process in favor [sic] of Democrats and against Republicans,” he said, while praising the rank-and-file members.

The central contention of the document, it is reported, is that deputy attorney general Rod Rosenstein did not make clear to a federal court when he requested permission to extend FBI surveillance of former Trump aide Carter Page that some of the information he was citing had come from a Fusion GPS report that had been financed by Democrats.

The House Intelligence Committee voted on Monday to release the memo, invoking a rarely-used congressional rule. But the FBI criticised the decision, calling on the president not to publicise the document which could contain classified information.

“The FBI was provided a limited opportunity to review this memo the day before the committee voted to release it,” the bureau said in a statement on Wednesday.

“As expressed during our initial review, we have grave concerns about material omissions of fact that fundamentally impact the memo’s accuracy.”

The memo has become a bitter battleground between Republicans and Democrats in the ongoing Russia investigation, and follows growing claims by Trump allies that the FBI and the Russia investigation is biased against Mr Trump. An online campaign #releasethememo gained traction in recent weeks, pushing the issue to the fore.

Democrats on the House Intelligence Committee also compiled their own memo on the underlying document. While Republicans voted to block its release, House speaker Paul Ryan suggested that he would support its publication.