Up to 90 migrants feared drowned off Libya coast

Most of dead believed to be Pakistani nationals, as search for survivors continues 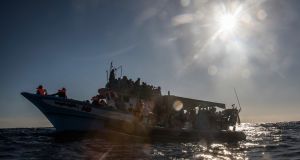 An estimated 90 migrants are feared to have drowned off the coast of Libya after a smuggler’s boat capsized early on Friday, leaving three known survivors and 10 bodies washed up on shore, the International Organisation for Migration (IOM) said.

Survivors told aid workers that most of the migrants on board were Pakistanis, who make up a growing number of those attempting the hazardous voyage across the Mediterranean to Italy from North Africa, IOM spokeswoman Olivia Headon said.

“They have given an estimate of 90 people who drowned during the capsize, but we still need to verify the exact number of people who lost their lives during the tragedy,” Ms Headon, speaking from Tunis, told a Geneva news briefing.

“What has been reported to us is that it’s mostly Pakistanis who were on board the boat, but we still need to verify the nationalities and how many from what country,” she said.

Ten bodies had washed up on Libyan shores so far, two of them Libyans and the rest Pakistanis, she said “I believe the Libyan coastguard is looking for other survivors off the coast,” Headon added.

Another IOM spokesman, Leonard Doyle, said the boat was believed to have left shore on Thursday before capsizing early on Friday morning.

The tragedy demonstrates the continued allure of Europe for desperate migrants fleeing conflicts and poverty, Mr Doyle said, despite tighter surveillance of the main smuggling routes by the Libyan coastguard, backed up by European cash and know-how.

“They [the migrants] are lured there by social media. They get on to a phone, they are promised El Dorado, they think life is going to be great. And before they know it, they are getting into the hands of awful criminal, extorting people – smugglers, traffickers, this dreadful, shocking torture,” he said.

Earlier on Friday security officials in the western Libyan town of Zuwara said two Libyans and one Pakistani had been rescued from the boat. They also confirmed the recovery of 10 bodies, mostly Pakistani, but gave no further information.

Zuwara, located near Libya’s border with Tunisia, was a favoured site for migrant boat departures over the past two years but of late has seen only occasional departures. A statement from the Zuwara coastguard said their initial information suggested there were some 90 people on board.

Libya is the main gateway for migrants trying to cross to Europe by sea, though numbers have dropped sharply since July as Libyan factions and authorities – under pressure from Italy and the European Union – have begun to block departures.

More than 600,000 people are believed to have made the journey from Libya to Italy over the past four years.

Prior to Friday’s incident, some 6,624 migrants are believed to have arrived in Europe by sea so far this year and a further 246 have died, according to IOM figures.

The Libyan coastguard, which receives EU funding and training, has become more assertive in recent months in intercepting migrants and bringing them back to Libya.

Activists have criticised the policy, saying migrants often face extreme hardship and abuse in Libya, including forced labour, according to Human Rights Watch and other rights groups.

Migrants who are caught trying to cross to Italy are put in severely overcrowded detention centres authorised by the interior ministry. – Reuters