Q&A: What is the Republican memo and why is it controversial? 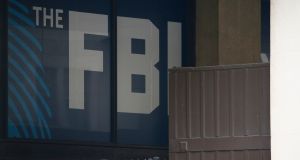 US president Donald Trump is expected to sanction the release on Friday of a controversial memo that purports to show bias against him at the FBI and justice department. Photograph: Reuters/ Jim Bourg

The White House is expected to release a controversial memo on Friday in a move that threatens to escalate tensions with the FBI. US president Donald Trump is expected to sanction the publication of the memo, which was sent by the House Intelligence Committee to the White House earlier this week.

What is the latest controversy involving the Russia investigation and the memo?

On Monday the House Intelligence Committee – a key committee in Congress – voted to release a controversial memo related to the Russia investigation. The four-page document was written by Republican aides and outlines the content of a series of classified department of justice files that were released to the committee. The underlying classified information has not been released, just the four-page document explaining it. The committee voted to release it and it has now been sent to the White House. Trump is likely to sanction its release as early as Friday.

What does the memo say?

From what we know, the memo alleges that deputy attorney general Rod Rosenstein failed to explain to a federal court, when he sought permission to extend surveillance of Trump associate Carter Page in the autumn of 2016, that some of the information the FBI was using to justify the surveillance was based on a disputed dossier provided by consultancy Fusion GPS – research which was originally funded by Democrats. Republicans argue that this proves that the information was inherently biased against Trump. Since the introduction of the Foreign Intelligence Surveillance Act (FISA) in 1978 , the government must secure permission from a judge on the foreign intelligence surveillance court if they want to wiretap an individual.

Why is it controversial?

The FBI and the department of justice have pleaded with the committee not to release the information, arguing that it will set a precedent for releasing potentially sensitive and classified material. They also argue that the memo does not contain all the facts – in other words, the memo essentially cherry-picks the information its authors want to highlight. As the FBI said in a statement on Wednesday: “The FBI was provided a limited opportunity to review this memo the day before the committee voted to release it. As expressed during our initial review, we have grave concerns about material omissions of fact that fundamentally impact the memo’s accuracy.”

What do Democrats say?

Democrats on the House Intelligence Committee have reacted furiously, with top senator Chuck Schumer accusing the committee’s chair, Republican Devin Nunes, of working to “undermine the rule of law and interfere with the Russia probe”. Adam Schiff, the top Democrat on the committee, has also called for a fresh vote to be held on its release, claiming that the memo had been changed since the committee voted on it on Monday. Democrats composed their own memo summarising the content of the underlying documents, but Republicans on the committee voted against its release on Monday.

What are Republicans saying?

House speaker Paul Ryan and other Republicans have said that it is question of civil liberties and nothing to do with the Robert Mueller-led investigation into Russian interference in the election. Asked about the issue at a Republican think-in in West Virginia on Thursday, Ryan said: “The [FISA] law allows the government to go to a secret court to get a wiretap on a citizen. This is an incredible power . . . we need to make sure that this power is being exercised properly and judicially.”

What has Donald Trump said?

The president is expected to sanction the release of the document on Friday. He has repeatedly called for the memo to be released, arguing that it shows an inherent anti-Trump bias within the FBI. His supporters and much of the conservative media seem to agree. The online campaign #releasethememo has been gaining traction in recent weeks, bringing the issue to national attention, though there have been claims that some of the individuals behind the campaign are Russian operatives.

What are the ramifications?

The memo scandal is the latest issue to fray relations between the White House and the intelligence services, a constant feature of the Trump presidency. Even though the current FBI director Christopher Wray, who replaced James Comey after he was fired by the president, was a Trump nominee, it is possible that he could stand down over the issue.

There are also question marks about the future of deputy attorney general Rosenstein, whose decision to seek the surveillance of Carter Page is at the centre of the memo. Rosenstein took over the Russia investigation last year when attorney general Jeff Sessions recused himself.

While Rosenstein was perceived by many as loyal to Trump – he wrote the note justifying the firing of Comey last May on the grounds of his failures regarding the Clinton email scandal – he was also the person who decided to appoint special counsel Robert Mueller.

Trump has repeatedly called the Mueller investigation a “witch-hunt” and was reportedly furious with Sessions’s decision to recuse himself, leaving Rosenstein in charge.