Protests over pension changes are set to continue over the weekend 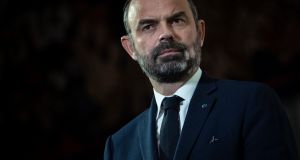 “You can’t stop a mobilisation by waving a magic wand in a speech,” French prime minister Edouard Philippe warned deputies from President Emmanuel Macron’s party, La République en Marche, on the eve of his landmark address on pension reform.

Any hopes that Mr Philippe’s speech might end the strikes, which have paralysed France for the past week, were quickly dashed on Wednesday.

The neo-Communist CGT trade union called on workers to “reinforce the strike”. Unsa, the main union at the Paris transport authority RATP, asked its members to “enlarge” their strike “for the long term”.

Until Wednesday, Parisians asked whether the strike would last until Christmas. Now there is talk of a stoppage lasting into the new year.

All trade unions reacted with hostility to the plan detailed by Mr Philippe, including France’s largest and most moderate union, the CFDT, which had until now reserved judgment.

The CFDT supports the transition from a system based on the number of trimesters worked to the points system advocated by the government. But it opposes the de facto postponement of retirement to age 64.

“The red line has clearly been crossed,” the CFDT’s leader, Laurent Berger, said. He referred to Mr Philippe’s announcement that although employees will still have the right to stop work at age 62, from 2027 they will have to work until age 64 to gain full benefits.

There have been slight improvements since the strike began eight days ago, but transport is still severely disrupted. Only one in four high-speed TGV trains, four in 10 regional trains and one in five trains in the Paris department will run on Thursday. Ten Paris metro lines will remain shut, but half of buses and trams will function.

Unions have called for local demonstrations on Thursday and over the weekend, with a third day of nationwide marches on December 17th.

The French will only regain confidence if “we tell them the truth”, Mr Philippe said. “To guarantee pensions . . . to take advantage of longer life expectancy without raising taxes, the only solution is to progressively work a little bit longer. That is the case in all of Europe and throughout the world.”

In 1960, the prime minister noted, there were four French workers to finance every pension. Today, the ratio is 1.7 to one. The revised system will continue to have “the highest level of coverage in the world”, he promised.

Only half as many protesters marched on Tuesday, compared with the opening day of the strikes on December 5th. The ministry of education says the number of teachers on strike has diminished from 45 per cent to 16 per cent.

Yet the hard core of transport workers appears more determined than ever. Mr Philippe made concessions to many groups in his speech, but offered nothing to the SNCF railway and RATP Paris transport workers. He promised to end their special pension regimes “progressively, without brutality and with respect for individual cases”. Addressing transport workers who have reported to work during the strike, he added, “The time of the universal system has come. That of the special regimes is ending.”

After repeating three times that there will be no exceptions to the new “universal, fair, responsible” pension system, Mr Philippe went on to make exceptions.

People who begin work before the age of 20, and those in “tiring professions”, such as hospital night nurses, will be able to leave two years earlier than others. Firemen, police, gendarmes, prison guards and soldiers will retain the right to early retirement.

Mr Philippe admitted that “a mechanical application” of the new system would significantly reduce teachers’ pensions. “I say clearly that it would be unacceptable for teachers to lose a single euro of their pensions. It will not happen.”

Mr Philippe promised that teachers will receive a pay rise before the end of Mr Macron’s five-year term, in order to maintain the level of their pensions. The leading teachers’ union, FSU, shunned the offer, saying, “Our discontent and determination remain intact.”

The government has compromised more on the calendar of the reform than its content. French people born before 1975 “will not be affected”.

“On the 1st of January 2022, new rules will be put in place, and the new entrants will integrate the regime,” Mr Philippe said. “The universal system will be irreversible.”

Mr Philippe said the draft law will be prepared by the end of the year. It will be presented in cabinet on January 22nd and debated in the National Assembly in February.