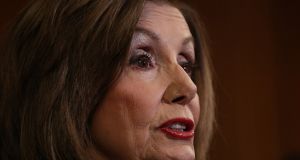 The Democratic congressional leadership, headed by Speaker Nancy Pelosi, will be rightly satisfied with the work they have done on the impeacment inquiry so far. Photograph: Loren Elliott/Reuters

Democrats in the US House of Representatives today begin what is likely to be the final week of their impeachment inquiry into President Donald Trump. Articles of impeachment – the charges against Trump – are expected to be tabled early in the week, allowing for a formal vote of the House as early as Thursday. If the Democrat-controlled chamber votes to impeach, that would clear the way for a trial in the Senate in early January.

Speaker Nancy Pelosi will be rightly satisfied with the work her party has done so far. In mere weeks, the inquiry succeeded in unearthing remarkable – and in some cases damning – evidence against Trump, all of it scrupulously focused on the kernel of the investigation: whether the president withheld a White House meeting, and even security funding, from Ukrainian president Volodymyr Zelenskiy in order to put pressure on Kiev to open an investigation into former US vice-president Joe Biden that his son. Despite stunts, provocations and obstruction from elements in the Republican Party, the Democrats marshalled the evidence and conducted the hearings with rigour and professionalism.

Pelosi will also be relieved to see that public opinion towards impeachment has held steady for the past month. Polls show that Americans are evenly divided, with about 47-48 per cent in favour of impeachment and 44-45 per cent against it. Republicans hoped they would gain from public scepticism towards the process, and have used that lever heavily in their recent advertising, but to relatively little gain.

The process is still fraught with risks for Democrats. Their eagerness to conclude it quickly reflects anxiety among 31 Democrats who represent districts won by Trump in 2016. They believe the public has limited patience for prolonging the process and are sensitive to the slur that they are prioritising a partisan fight over the issues that exercise voters the most. That’s understandable. But it’s no argument for not seeing through a process ultimately designed to buttress American democracy at a time when it is under real strain.