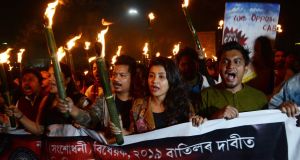 The Citizenship (Amendment) Bill, or CAB, will naturalise all Buddhists, Christians, Hindus, Jains, Parsis and Sikhs who fled the Muslim-states of Afghanistan, Bangladesh and Pakistan before 2015. It was passed on Wednesday by 125 votes to 105 after an impassioned day-long debate in India’s upper house of parliament .

The Bill, which opposition MPs and activists claim undermines India’s secular constitution, was approved earlier on Tuesday by parliament’s lower house. It will now be sent to President Ram Nath Kovind for final approval, before becoming law.

Federal home minister Amit Shah, a close associate of Mr Modi’s who moved and piloted the CAB in parliament, said all persecuted non-Muslim migrants from the three Muslim states were welcome; others who had overstayed their residency permits in India would now not be prosecuted.

He also invoked history by saying the Bill would right the wrongs of partitioning India into a Muslim Pakistan and a secular India at the time of independence in 1947, and roundly blamed the opposition Congress party for the division.

Opposition MPs vehemently opposed the Bill and accused the BJP of approving legislation that echoed measures from Nazi Germany by equating religion with citizenship.

“Those who cannot remember the past are condemned to repeat their mistakes, ” said Derek O’Brien, an MP from the regional Trinamool Congress Party. Laws passed in Nazi Germany had an eerie similarity to those passed in India today, he said.

Others accused Mr Modi’s government of being fundamentally opposed to India’s 200 million Muslims and of attempting to make India a Hindu theocracy. They said they would challenge the Bill in India’s supreme court in an attempt to strike it down.

The authorities also suspended all internet services and mobile telephones in this state for the next 24 hours, in an attempt to try to contain the violence by preventing inflammatory messaging from spreading via social media platforms.

The US Commission on International Religious Freedom has criticised the BJP for the Bill, which it claims goes against India’s fundamental secular character. A bipartisan body that makes foreign policy recommendation to the US government has urged it to consider sanctioning Mr Shah for his role in approving the Bill.