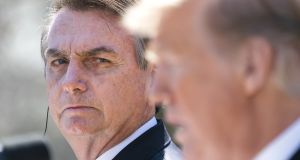 Brazilian president Jair Bolsonaro and US president Donald Trump at the White House in March 2019. Bolsonaro was quick to embrace his nickname of “the Trump of the Tropics”, and has adopted his US peer as kind of political lodestar. Photograph: Getty Images

Despite the now standard diplomatic ructions that come with a visit from US president Donald Trump, Conservative party planners can be reasonably happy with how last week’s Nato meeting in Watford, England, went off. The usually voluble Trump said nothing to derail the election prospects of UK prime minister Boris Johnson by denying any predatory interest in the National Health Service (NHS) even as he remains a “fan of Brexit”.

But anyone in London who thinks such message discipline bodes well for the prospects of a future trade deal between his administration and the UK once the latter has finally cut itself loose from the EU should pause and consider the implications of another of Trump’s diplomatic moves last week.

Before heading off to the military alliance’s rather fractious birthday party the US president carried out his diplomatic equivalent of a drive-by shooting. On Monday, out of the blue, he took to Twitter to announce he was reimposing tariffs on Brazilian and Argentine steel and aluminium imports because the two South American states had been “presiding over a massive devaluation of their currencies. which is not good for our farmers”.

The tweet apparently blindsided Trump’s own officials, to say nothing of the administrations in Brasília and Buenos Aires. They thought the steel and aluminium issue had been resolved last year when they voluntarily imposed quotas on their exports in a bid to appease the nativist US president.

The tweet also shocked observers because it was a naked self-declared act of retaliation, and so violated World Trade Organisation rules.

Even worse, the grounds for Trump’s move were baseless. The Brazilian real and the Argentine peso have been on the slide of late. Any monetary official in Washington could have told the US president that Brazil’s central bank has been intervening in markets trying to prop up the real, not accelerate its slide.

Meanwhile, the one thing outgoing Argentine president Mauricio Macri would have loved to have had this year is some control over a currency that has lost almost half its value against the dollar. The peso’s collapse provided the background to his failed attempt to win re-election in October.

‘Trump of the Tropics’

Trump’s Twitter diplomacy was particularly humiliating for Brazil’s far-right president Jair Bolsonaro. He was quick to embrace his nickname of “the Trump of the Tropics”, and has adopted his US peer as kind of political lodestar.

The two had a warm meeting in Washington at the White House in March, and Bolsonaro went so far as to blub “I love you!” when the two crossed paths at the UN General Assembly in September. ( Trump responded with a less-effusive “nice to see you again”).

Since taking office in January, Bolsonaro has abandoned Brazil’s diplomatic traditions of pragmatic multilateralism and a self-respecting demand for reciprocity in bilateral relations in pursuit of a close alliance with the Trump administration.

Even before last Monday’s presidential tweet this diplomatic revolution was subject to heavy criticism because it had delivered so little apart from what was becoming ritual embarrassment.

Already this year Bolsonaro has granted the US access to his country’s Alcântara space base which, being close to the equator, has lower fuel costs for rocket launches.

He has opened up his domestic market to US wheat exports, hitting farmers from traditional partner Argentina, and increased the tariff-free quota for US imports of ethanol without achieving a reciprocal gesture for Brazilian sugar exports (which would hit protected sugar farmers in the key electoral state of Florida).

Brazil has also voluntarily given up its right as a developing economy to advantageous treatment at the WTO.

Finally, US citizens can now travel to Brazil without a visa even though Brazilians still require one to enter the US.

And in return? The Trump administration has moved to designate Brazil a preferential non-Nato ally, allowing it greater access to US weapon purchases. Otherwise there is little to show for the series of concessions made by Brasília.

Before last week’s threat to hike tariffs the biggest humiliation suffered by Bolsonaro was when the US failed to follow through on what Brasília thought was a commitment by Washington to promote Brazil’s candidacy to join the Organisation for Economic Co-operation and Development (OECD) club of rich nations. Instead it sponsored the applications of Argentina and Romania.

In light of this reversal, Brazil’s foreign minister Ernesto Araújo (who before being appointed to the job wrote a paean describing Trump as the saviour of the West) was asked about the benefits of the government’s US policy. He defended it saying that shortly Washington would be reopening the US market to Brazilian beef exports. But it has not, and now instead is targeting Brazilian metals in defence of “our farmers”.

Brazil’s diplomatic community is little surprised at the failure of Bolsonaro’s US diplomacy, which it sees as having confused some personal chemistry and an ideological affinity for something deeper.

“The clue is in the phrase ‘America first’,” says the country’s former foreign minister Celso Amorim. “Everyone knows the old-rule countries do not have friends – they have interests. But Bolsonaro is disappointed now because he does not know how this works.”

For now Bolsonaro is floundering in his response to the latest blow to his US policy. He has boasted about how he has an open line to Trump, but remains coy on when he might call him.

He has even provided some cover for his tormentor explaining that last week’s tweet was the result of domestic political calculations, implicitly accepting the US president is willing to embarrass a supplicant foreign ally to shore up support at home ahead of his re-election campaign next year.

Bolsonaro’s opponents have since labelled such supineness as (yes) “vassalage”.

The UK is obviously more important than Brazil in Washington’s strategic calculations. But the lesson from Bolsonaro’s torrid week for Brexiteers placing great store in a “magnificent” trade deal with the US is that personal chemistry and ideological affinity (not to mention previous deals) mean little to Trump when it comes to global trade negotiations, much less domestic political advantage.

As the Brazilian president can now confirm, he really means it when he says “America first”.

Tom Hennigan is based in São Paulo, and writes about South America for The Irish Times